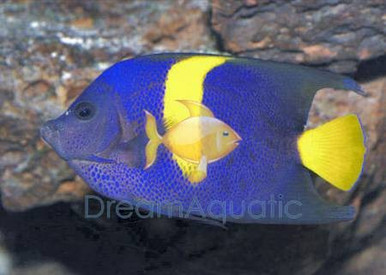 Asfur Angelfish - Pomacanthus asfur The Asfur Angelfish (Arusetta asfur or Pomacanthus asfur) is sometimes called the Purple Moon Angelfish. It is best to only keep one per tank. They are from the Indo-Pacific region.Water quality must be perfect, and the tank been setup at least 4 months before adding. These fish are somewhat territorial. Due to dietary concerns, Asfur angelfish can be difficult to keep. Getting one to feed in captivity can be problematic, and if they are not eating in the store when purchased, almost impossible. If feeding well on a varied diet, they do prove to be moderately hardy as Angelfish go. Mussels, Shrimp, Algae, Romaine Lettuce, Krill, and other items will be a good start at a good diet. Since they are grazing omnivores, feed about three times a day in small quantities. It seems as if the Max length of Asfur species is totally undecided upon. One source lists 6 inches, two list 9 inches, and two sources list 15 inches as Max length. Sources are limited, and the other sources list lengths between these numbers. A temperature of 77-82 is ideal. Quarantine all of your Angelfish first, as this will greatly increase your success. Asfur Andgelfish is not known to be overly reef safe, but there may be exceptions to this rule that we havenÍt discovered, such as a group of inverts they wonÍt touch. Recommended Tank Size : 135 Gallon . Asfur Angelfish are somewhat shy species, so provide plenty of rockwork for hiding places. Origin:
Found mainly on protected shoreline reefs with rich growth of hard and soft corals in waters from 3-15 meters deep. It can be found in the Western Indian Ocean from the Red Sea and Gulf of Aden, south to Zanzibar. Specific Care Information:
It is important that you feed angelfish all kinds of live, frozen, and prepared formula foods. Best to feed small amounts several times a day. A good formula that can be made at home consists of mussels, shrimp, squid, and spinach. Should be fed an angelfish formula that contains sponge. Diet:
Feed a varied diet consisting of large chunks of meaty foods. These foods include krill, raw table shrimp, squid, clam and mussel. It is also a good idea to occasionally supplement with some type of herbivore diet containing spirulina and supplement with a sponge fortified formula specifically for Angelfish. Breeding and Propagation:
Asfur Angelfish are not accomplished in captivity.