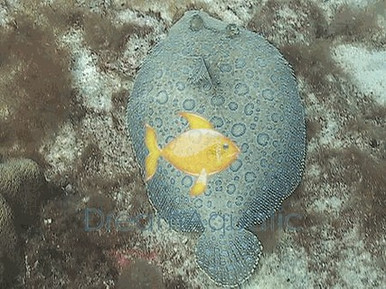 Assorted Flounder Fish - Bothus lunatus The Assorted Flounder Fish, also known as Plate Fish or Peacock Flounder, is laterally compressed and lays on its side on the bottom of the ocean or aquarium. Early in development, both eyes migrate to the left or right side, usually the left. The Assorted Flounder fish has a dull color with occasional light blue spotting. This allows it to lay in the sand, where the dull colors blend in making it very hard to see. The Assorted flounder fish is a relatively common, but easily overlooked, inhabitant of sandy areas of reef flats, lagoons, and outer reef slopes. It may occasionally be found resting on smooth, bare rock substrates and has been collected as deep as 84 m. Like all flounders, the Assorted flounder fish has both eyes on the same side of its head. It lies on the bottom, usually over sandy areas. Sometimes it burries itself under a thin layer of sand so that only its eyes are exposed. Post-larval Assorted flounders look like normal fishes, but soon after settling on the bottom their right eye migrates to the left side of the body, the side which is pigmented and faces up. Three species are known from shallow inshore waters of Guam. In addition, three species of soles (Family Soleidae), which have both eyes on the right side of the body, are known from shallow waters of Guam. All flatfishes are carnivores and generally inhabit sandy bottoms, some living in the deepest parts of the ocean. Maximum Size:
The Assorted Flounders grows up to 14 inches. General Size:
This Assorted flounder fish is usually 3 inches in length. Minimum Tank Size:
A 130 gallons or larger aquarium provides good environment for these Assorted Flounder Fishes. Tank Conditions:
The Assorted Flounder fish should ideally be kept in temperatures between 71 and 74 degrees Fahrenheit. A pH value of 8.3 or 8.4, and a specific gravity of 1.020 to 1.025 should be maintained. When kept with invertebrates, the specific gravity range should be 1.023 to 1.025, for the invertebrate species. In a fish only aquarium, the specific gravity should fall between 1.020 and 1.023. Habitat:
The Assorted Flounder Fish is found in Indo-Pacific from East Africa to Ducei and Hawaii, to Lord Howe and to north of the Ryukus. Diet and Feeding:
Carnivorous, likes to eat variety of chopped meats. It will eat most any invertebrate or small fish that come within its vicinity.