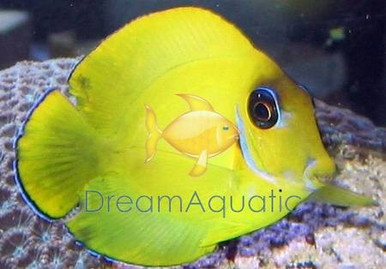 Atlantic Blue Juvenile Tang - Yellow Juvenile Coloration Tang The Atlantic Blue Tang, also known as the Blue Caribbean Tang, Blue Tang Surgeonfish, and simply the Blue Tang, has an oval body with bold markings that change as the fish matures from juvenile to adult. A juvenile is bright yellow with two blue bands at the eyes, and additional blue markings at the fringes of the dorsal and fins. When mature, the blue will become even brighter with markings running horizontally along the entire body. It may have a yellow tail. Atlantic Blue Tang requires a larger aquarium is necessary to provide plenty of swimming room. It is aggressive towards other Tangs and Surgeonfish, but peaceful with other fish. The Atlantic Blue Tang diet should consist of algae and vegetarian items such as Spirulina, zucchini, broccoli, leaf lettuce, and dried seaweed. The Atlantic blue tang is highly sensitive to damage from even minor ammonia levels and poor water quality. It is a fish that is difficult to capture without damaging them. The Achilles' skin is tender and easily scratched or marked. Its skin will show marks from any type of net, even a so called "soft" net Maximum Size:
This species grows to 8 inches in length. General Size:
This Atlantic blue Tang is about five to eight inches in length. Minimum Tank Size Suggested:
A 100 gallon or larger aquarium provides a good environment for these Atlantic blue Tang. Tank Conditions:
The Atlantic blue Tang should ideally be kept in temperatures between 72 and 78 degrees Fahrenheit. A pH value of 8.1 or 8.4, and a specific gravity of 1.020 to 1.025 should be maintained. When kept with invertebrates, the specific gravity range should be 1.020 to 1.025, for the invertebrate species. In a fish only aquarium, the specific gravity should fall between 1.020 and 1.023. Habitat:
The Atlantic blue Tang occurs in Hawaiian waters, but the distribution of this species extends from Hawaii southward to central Polynesia and westward through Micronesia and Melanesia, but it apparently does not extend to the Philippine Islands, the East Indies, and the Indian Ocean. Feeding and Diet:
The Atlantic blue Tang fish is a herbivore. Its main diet consists of marine algae, having an unusually long digestive tract to digest the plant matter they eat. They are constant feeders and in nature spend most of their day grazing. A habitat with algae growth is good for them, which in turn helps to keep the algae in an aquarium cropped and in check.