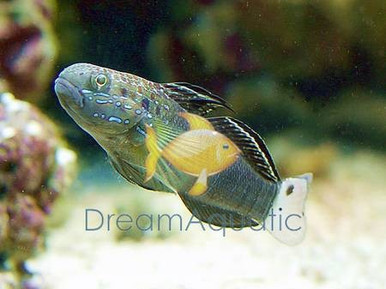 Banded Goby - Amblygobius phalaena The Banded Goby (Amblygobius phalaena) is a tropical fish species that belongs to the Gobiidae family. This species is best identified by the 5 white-edged grey body bars and the black spot on the first dorsal fin. The body can be white to pale yellow in colour however dark variations with brown colouration can be found. The Banded Goby is generally found on reef flats and sheltered coral reefs to depths of 20 metres. In the aquarium, the Banded Goby fish prefer peaceful surroundings with numerous hiding places. When kept in a tank with large, active fish they may hide most of the time and may not get enough to eat. The Banded Goby is the most easily maintained and is also the best substrate sifter. It is generally a good feeder, accepting most types of foods. There is a prominent ocellus (glossary) on the first dorsal fin and a black spot at the upper caudal fin base of the Banded Goby fish. The dorsal spines are 7 in number with 14 dorsal soft rays. There is only 1 anal spine with 14 anal soft rays. The Banded Gobies are usually seen swimming just above the bottom in areas of sand, silt or sparse seagrass. Maximum Size:
The Banded Goby grows to a maximum length of approximately 15cm. Tank Conditions:
The Banded Goby species require high quality water with temperature ranging between 72 and 78 degree Fahrenheit, specific gravity ranging from 1.020 to 1.025 and ph not less than 8.1 and also not more than 8.4. Habitat:
Banded Goby has a broad distribution throughout the warm tropical waters of the Indo-Pacific region and has been recorded from the Cocos-Keeling Islands, Marquesas and French Polynesia across to Australia and southern Japan. Feeding and Diet:
The Banded Goby fish prefer live foods such as brine shrimp, mysid shrimp, and amphipods however they may adapt to eating frozen foods that are chopped up finely enough to be swallowed whole. Some specimens may also sift sand through their gill rakers to trap small substrate dwelling invertebrates. They will supplement their diets by eating filamentous algae however a strict diet of algae alone will not keep them alive for very long. Breeding:
It is believed that the Banded Goby is a sequential hermaphrodite which means that it can function both as a male and a female however it can't fertilize it's own eggs. The eggs have often been found in aquariums, even with only one specimen in the tank. The Banded Goby fish lay the eggs in small caves and will tend them when fertilized until they hatch.