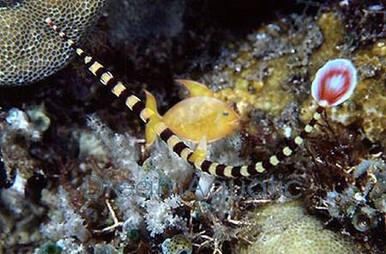 Banded Pipefish - Doryrhamphus dactyliophorus The banded pipefish is also known as Ringed Pipefish. Its body is very sleek resembling more like an eel. It has a greenish yellow body with black rings distributed all over its body. Its tail is oval shaped. The tail is a combination of red and white with a white spot placed at the middle of it. This fish is of peaceful nature. They pose no danger to other fishes. However, they are prone to attacks by aggressive fishes such as wrasses, tobies, triggerfish, porcupine fish etc. However, this fish is difficult to be kept in tanks. The banded pipefish must be kept secluded from other species of fish. One point should be mentioned here-that this fish can not be kept with invertebrates with tentacles (for example: corals and anemones) as they may harm it. The care level is difficult to achieve in the aquariums. However, this species poses no threat to ornamental invertebrates kept at the tank bottom. They swim at the bottom level in pairs. They swim upside down against ceiling of caves. So far as reproduction is concerned, they are pouch brooders. The male carries the eggs in pouch brooders, located under the tail. They are very resilient and the population doubles after every 15 months. Maximum Size:
This species can grow up to 8 inches in length. General Size:
This species is generally 3-5 inches in length. Minimum Tank Size Suggested:
The water holding capacity of the tank must be a minimum of 50 gallons. Tank Conditions:
The Doryrhamphus dactyliophorus should ideally be kept in temperatures between 72 and 78 degrees Fahrenheit. The Ph balance of the water should also be maintained between 8.1 and 8.4 as they prefer alkaline content of the water to be high. The specific gravity should be maintained ideally between 1.020-1.025. The tank must have multiple caves like structures. Plants and algae should also be there at the bottom of the tank to simulate their natural habitat. Habitat:
The banded pipefish is found distributed in the Western Indian Ocean. They prefer tropical climate. They are also found in large numbers at Red Sea and Sodwana Bay, South Africa to the Chagos Islands and Maldives. Feeding and Diet:
They are carnivore. The Banded PipefishÍs diet consists of small live invertebrates such as: vitamin rich brine shrimp, baby guppies, grass shrimp, mosquito larva and daphnia. Another major part of its diet, at least in aquariums, is mysid shrimp. The pipefish takes a long time to eat. This is due to its tiny tubular mouth. It should be fed at least three times a day in captivity.