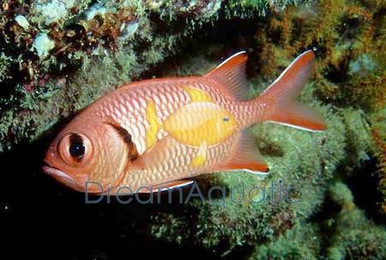 Big Eye Squirrelfish - Myripristis species The Big Eye Squirrel is an excellent addition to a peaceful Fish Only system. With it's large eyes and downturned mouth, the Big Eye Squirrel appears to be constantly frowning. This fish is very hardy and can be kept singly but prefers schools. Provide them overhangs and caves. The Big Eye Squirrel fish is primarily a nocturnal animal, feeding during the night, and spending most of the day hiding out under coral heads on the reef. This is the squirrelfish, one of many fishes found on the Flower Garden Banks and Stetson Bank year round. Although you may see the Big Eye Squirrel during the day (especially if you spend some time looking under ledges and in holes), you are much more likely to spot them during a night dive. The large eyes on this fish are especially designed to maximize ambient light on the reef at night. The red pigment is a bit more complicated. When light passes through water, certain wavelengths can penetrate further than others. Red happens to be one of the colors least able to reach any appreciable depth. Therefore, a fish that is primarily red will look gray or black, and will blend in quite nicely with the background of the reef, especially at night when there is little light to begin with. Do not handle this fish with a net as it can be easily damaged by the material. It prefers a dimly lit tank. Very nice bright red coloration, the Big Eye Squirrel is a low maintenance fish. It may act peacefully toward other fish. This is a hardy fish Maximum Size:
The Big Eye Squirrel grows up to 9 inches. General Size:
This fish generally comes from 2 to 7 inches Minimum Tank Size:
The Big Eye Squirrel prefers a tank of at least 60 gallons with plenty of places to hide & swim. Tank Conditions:
The Big Eye Squirrel should ideally be kept in temperatures between 72 and 78 degrees Fahrenheit. A pH value of 8.1 or 8.4, and a specific gravity of 1.020 to 1.025 should be maintained. When kept with invertebrates, the specific gravity range should be 1.020 to 1.025, for the invertebrate species. In a fish only aquarium, the specific gravity should fall between 1.020 and 1.023. Habitat:
The Big Eye Squirrel occurs on coral reefs of the Indo-West Pacific from southern Red Sea and East Africa to New Caledonia, north to southern Japan, south to Australia Diet and Feeding:
The Big Eye Squirrel is an carnivore that can be fed a mixed diet of shrimp, squid, clams, fish, and other meaty fares suitable for carnivores, as well as marine algae and vitamin-enriched herbivore foods.