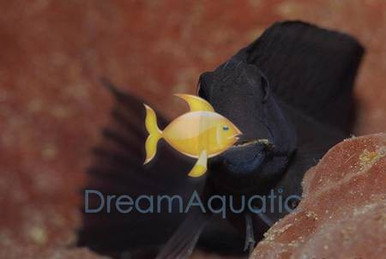 The Black Combtooth Blenny - also known as Namive's Blenny or the Kupang Black Blenny - isn't often seen in the hobby. Adding one to your reef aquarium may just cause a little blenny envy among friends! Useful for controlling microalgae on live rock and corals, these reef-safe herbivores pack plenty of personality, darting from perch to perch among the rockwork. Body coloration graduates from a primarily blackish-purple body to an electric indigo and yellow-white tail. In nature, they are most commonly found among the shallow reef flats, but also inhabit estuaries and outer reef lagoons to about 60 feet deep. Combtooth Blennies are named for their distinctive fine teeth - about 100! - embedded in their lips rather than their jaw. They use these teeth to scrape algae off rocks and aquarium glass. Generally found amid crevices and rocks on the bottom of its environment, the Black Combtooth Blenny needs a tank of at least 30 gallons with plenty of scattered live rock for perching and hiding. They are generally peaceful, but may become territorial towards others within the same genus. Characteristics & Compatibility: This Blenny does best in a tank with large amounts of natural algae to graze on and it is best to house singly unless the two are a mated pair. The Black Combtooth Blenny spends most of its time flitting from rock to rock as it looks for algae to feed upon. Tank Compatibility: A generally peaceful Blenny that may be territorial towards other conspecifics. Should not be kept with any aggressive tankmates. This fish is reef-safe. Origin: Eastern Asia Diet: The diet of the Black Combtooth Blenny should include vegetable matter, including frozen and dried foods containing marine and blue-Bicolor algae. It will also feed on (and help control) algae growing in the aquarium.