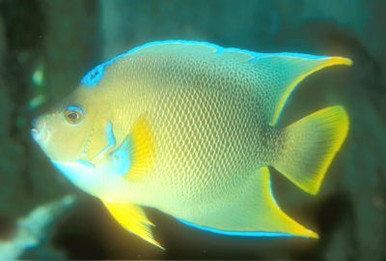 Blue Angelfish - Holocanthus bermudensis The Blue Angelfish is a relatively large, attractive angelfish found in the Caribbean. This angelfish is yellowish-tan with areas of bright light blue trim it is quite similar to the Queen angelfish and the two are often mistaken. One of the obvious differences in the coloration of these two fish is that the Queen angelfish will have blue trim on the trailing edges of its upper and lower fins while the Blue Angel fish does not. While the Blue Angelfish is sometimes found in smaller sizes of about 3 inches, it is usually available as a much larger fish. Generally the Blue Angel fish should be kept in aquariums larger than hundred gallons and sometimes much larger depending on the size of a fish. It will lead a wide variety of food including flake food, mussels, and clams. The Blue Angelfish is relatively non-aggressive, however, as with most angelfish it is not considered safe to keep in miniature reef aquariums, as it may attempt to feed on corals. The Blue Angelfish requires a large aquarium of at least 150 gallons with plenty of hiding places. Water Conditions: Keep water quality high (SG 1.020 - 1.025, pH 8.1 - 8.4, Temp. 72 - 78Á F). The Blue Angelfish groups up to 15 inches in size. Dwarf Blue Angelfish Are generally available at 2-3 inches. Habitat:
The Blue Angelfish is usually found near Western, South Pacific Specific Care Information:
Dwarf Angelfish are generally peaceful fish but will often quarrel with members of their own species and even genus if they look similar enough. Though there are reports generalizing this species are 'reef safe', we strongly advise to add them to a reef with extreme caution. The reason for this is that many of this species will behave like model citizens for a while, but one day will go after corals and clams for no reason. This may have something to do with the Dwarf Angelfish being predominately plankton eaters as juveniles. An underfed adult may attempt to try something new and find that clams and corals are it's newest favorite diet. We recommend purchasing the youngest specimen available in hopes it settles down and learns to eat a captive diet prior to learning that corals and clams are a tasty treat. Diet:
A varied diet of meaty foods such as vitamin-enriched brine shrimp and finely-chopped crustacean flesh, Spirulina, marine algae, high-quality angelfish preparations, mysid or frozen shrimp, and other meaty items will provide good nutrition. Sexual Differences:
Blue Angelfish is hermaphroditic, very difficult to breed in an aquarium, and there are no distinguishing markings that differentiate males from females.