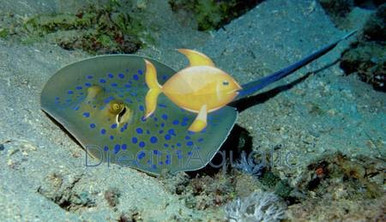 Blue Dot Stingray - Taeniura lymma The Blue dot Stingray is also called the Bluespotted Ribbontail Ray and Blues sppotted Stingray. It is an attractive bottom dwelling fish. It has a tan body with blue spots and stays relatively small, but requires a 150 gallon or larger aquarium as an adult. The Blue dot Stingray requires sand as the substrate, as its abdomen is easily scratched by a coarser substrate, which could result in an infection. It likes to cover itself with the soft substrate as camouflage. Once acclimated, it will eat any invertebrates in the tank. The tail spine is venomous and only used for protection. Caution should be taken when netting it, or when it is not visible and maintenance is performed in the aquarium. It should never be exposed to copper-based medications. When first introduced, Blue dot stingray may not feed. The best way to encourage feeding is by offering it small pieces of cleaned squid, or freshwater ghost shrimp. When feeding well, it can be offered pieces of shrimp, scallops, or fish. Due to its lack of hardiness when introduced into an aquarium, it should only be kept by an experienced hobbyist. Maximum Size:
This species grows to 12 inches disc. General Size:
This Blue dot stingray is about nine to ten inches disc. Minimum Tank Size Suggested:
A 150 gallon or larger aquarium provides a good environment for these Blue dot stingray. Tank Conditions:
The Blue dot stingray should ideally be kept in temperatures between 72 and 78 degrees Fahrenheit. A pH value of 8.1 or 8.4, and a specific gravity of 1.020 to 1.025 should be maintained. When kept with invertebrates, the specific gravity range should be 1.020 to 1.025, for the invertebrate species. In a fish only aquarium, the specific gravity should fall between 1.020 and 1.023. Habitat:
The Blue dot stingray occurs on coral reefs in tropical marine waters of the Indo-Pacific. In Australia, the Blue dot sting ray is known from central to north-western Western Australia and from the entire length of the Great Barrier Reef south to northern New South Wales. Feeding and Diet:
The Blue Dot Stingray diet consist of meaty foods such as live shrimps, live fishes and sometimes crustacean flesh.