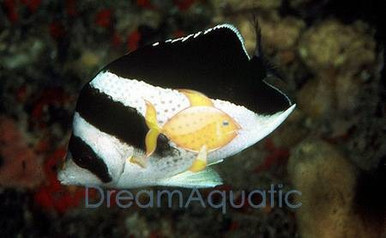 Burgess Butterfly Fish is one of the easier butterflyfish to keep. Hardy, and know to accept a larger span of prepared foods including pellets. Provide plenty of hiding places as this can be a shy and timid species. This fish requires large amounts of live rock for grazing. Most butterflyfish are known to nip at sessile invertebrates including coral and tridacnid clams. This species is known to eat aiptasia in the home aquarium. Social Behaviors: Found alone, in pairs, or in small groups. This fish likes company of its own kind. Maximum Size: Burgess Butterfly Fish can grow to 20 cm (8 inches). General Size Specifications: The small size will come to you generally 1 to 2 inches; the medium generally 3 to 4 inches; the large generally 5 to 6 inches not including the caudal fin. Minimum Tank Size: A minimum 55 gallon aquarium is recommended. Water Conditions: Keep water quality high (SG 1.020 - 1.025, pH 8.1 - 8.4, Temp. 72 - 78Á F). Habitat: Burgess Butterfly Fish are found in the Western Pacific. Feeding and Diet: The diet of the Burgess' Butterflyfish should consist of preparations containing various meaty foods. Finely chopped clams, shrimp, squid, mysis, brine, and krill should all be offered, as well as plenty of algae based products. Breeding/Reproduction: This species has not been cultivated in captivity. Marine butterflyfish have not reportedly been spawned successfully in captivity. There are, however, reports of some success in rearing wild collected larvae of some of the corallivorous butterflyfish. It is hoped these captive reared fish will be adapted to accept aquarium foods, and thus broaden the species selections that can be sustained in captivity.