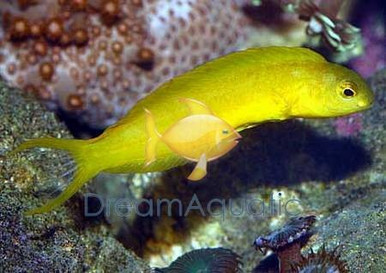 Canary Fang Blenny - Meiacanthus ovalaunensis The Canary Fang Blenny is also known as the Oualan Forktail Blenny, or Canary Blenny. The Canary Fang Blenny is aptly named, being a solid vibrant yellow. Males are generally larger than females and experience a succession of color changes when breeding. The Canary Blenny can make a wonderful addition to many community or reef aquariums. With their relatively peaceful natures and their brilliant colorings, these Blennies can make interesting captives. This blenny needs a minimum tank of 30 gallons with live rock for hunting and grazing in order to thrive. It is best to keep only one per tank unless a breeding pair is maintained. If attacked by other fish, the Canary Fang Blenny will retaliate by biting the inside of the mouth of the attacker. The Canary Fang Blenny is considered venomous and should be kept only with caution around children having tank access, since it may perceive fingers as an attacker and deliver a similarly painful bite. They are equipped with a pair of venomous fangs, which they usually use as a defensive measure against predation. These fangs can (and often do) deliver a painful bite, and it is advisable to avoid reaching into your Blenny's aquarium or hand feeding it. Canary Blennies are considered to be reef safe. They normally do well in community environments as long as plenty of space and hiding places are provided. However, they normally do not get on well with other Canary Blennies, and unless you are attempting to create a mated pair, it is advisable to keep only one of these fish per aquarium. One of the most charming traits of the Canary Blenny is its apparent boldness; these fish seem to spend little time hiding and often swim in open areas. Their bright, usually yellow, color can really add interest to an aquarium. Often, Canary Blennies are added to aquariums containing live rock. This allows them the opportunity to perform the natural grazing behavior they would show in the wild, and the material they glean from this rock provides an important part of the Canary Blenny's diet. The Canary Blenny reaches about 4 inches (10 centimeters) in length at maturity. It has two small, protruding, pointed canine teeth, which give it a fanged appearance. These teeth are associated with venom glands. As its name suggests, Canary Blennies are usually a bright canary yellow color. They have elongated slender bodies and an elongated tail. Canary Blennies are generally collected from the tropical Pacific Ocean. Because other Blenny species are known as Canary Blennies, it is important to mention the scientific name of the species you are referring to, in order to avoid confusion. Specific Care Information:
A single Canary Blenny should have a 25 gallon sized aquarium or larger. Temperatures between 75 and 78 degrees Fahrenheit (24 to 26 degrees Celsius) are appropriate. The pH value should remain between 8.3 and 8.4. A specific gravity between 1.020 and 1.025 will work nicely for a Canary Blenny. In a fish-only enclosure, the specific gravity should be in the lower end of this range (below 1.023); however, in aquariums containing invertebrates, the upper range, between 1.023 and 1.025, would be necessary for the maintenance of those animals. Normally, Canary Blennies are maintained on a variety of chopped meat and vegetable foods, including plankton, mysis shrimp, brine shrimp, or other crustaceans. Introducing Canary Blennies to well-established aquariums containing live rock has the advantage of allowing them to graze on plant material. Maximum Size: The Canary Fang Blenny Grows Up to 4 inches General Size Specifications:
The small size will come to you generally 1-1/2 - 3-1/2 inches not including the caudal fin. Minimum Tank Size Suggested:
The Canary Fang Blenny prefers a tank of at least 30 gallons with plenty of places to hide & swim. Water Conditions:
Keep water quality high (SG 1.020 - 1.025, pH 8.1 - 8.4, Temp. 72 - 78Á F). Habitat:
The Canary Fang Blenny is found Near the West Pacific Ocean: Fiji Feeding and Diet:
The diet of the Canary Fang Blenny should consist of finely chopped crustacean flesh, mysid and vitamin-enriched brine shrimp, as well as frozen herbivore preparations. In the wild, Canary Blennies graze and feed on plankton. Breeding and Propagation:
Canary Blennies usually reproduce in pairs. Males often change color quickly at breeding season, and are larger than females. Captive breeding is not widely accomplished.