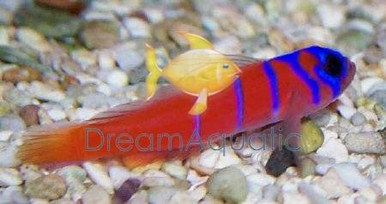 Catalina Goby - Lythrypnus dalli The Catalina Goby, also known as the Bluebanded Goby, was one of the first fish to be successfully farm raised, and it is considered one of the easiest marine fish to breed. It has an orange body with patches of blue on the head and face, and lighter blue vertical stripes on the anterior (front) half of the body. Males have a very dramatic eyespot on the fan-like dorsal fin. The Catalina Goby, though kept by many in warm reef aquariums and considered to be frail, can actually make a hardy captive when kept in more appropriate cooler water environments. The Catalina Gobies frequent areas strewn with rocks or boulders, and are found at depths between 0 and 200 feet (0 to 60 meters). In captivity, they are somewhat territorial toward each other. However, due to their small size, a pair can be kept in moderately sized aquariums. Be sure to provide plenty of hiding places for them. The Catalina Gobies normally get along well with other fish and are considered to be reef safe. The main concern in a community containing Catalina Gobies would be the lower temperature requirements of these fish, and the possibility of their being bullied or eaten by larger or aggressive fish. Many people maintain that the Catalina Goby will thrive most easily, and be shown to its best advantage, when kept alone in an aquarium with invertebrates. The Catalina Gobies may be quite disease resistant, and may live for years rather than months, when kept in appropriate, cooler temperatures. Size:
A mature Catalina Goby is usually around 1 inch (2.5 centimeters) long. They are brilliantly colored in blue and red hues. Most of the fish is a bright orange-red color. Toward the head, vertical blue bars appear, and the head may be almost entirely encompassed by a large band of the bright blue coloration. Like most Gobies, Catalina Gobies have elongated bodies with relatively small fins. Maximum Size:
A mature Catalina Goby is usually around 1 inch (2.5 centimeters) long Minimum Tank Size Suggested:
A single Catalina Goby should be kept in an aquarium of 20 gallons or larger. Tank Conditions:
Catalina Goby should ideally be kept in temperatures between 71 and 74 degrees Fahrenheit (22 to 23 degrees Celsius). A pH value of 8.3 or 8.4, and a specific gravity of 1.020 to 1.025 should be maintained. When kept with invertebrates, the specific gravity range should be 1.023 to 1.025, for the invertebrate species. In a fish only aquarium, the specific gravity should fall between 1.020 and 1.023. Habitat:
The Catalina Gobies are native to eastern Pacific regions, and are most commonly found in the Gulf of California. Feeding and Diet:
The Catalina Goby is a typical goby eating small crustaceans and other small marine organisms. In the wild, the Catalina Goby eats small pieces of fish and plant material. In the aquarium, it will consume almost any prepared foods for carnivores, mysid shrimp, table shrimp, and vitamin-enriched brine shrimp. It should be fed twice per day. Breeding:
Though Catalina Gobies are often observed spawning during summer months, no way has been found yet in which their tiny fry can be raised. Fry are about 2.5 millimeters long. It is believed that Catalina Gobies can be sexed by the length of their dorsal fins, which are believed to be longer on males.