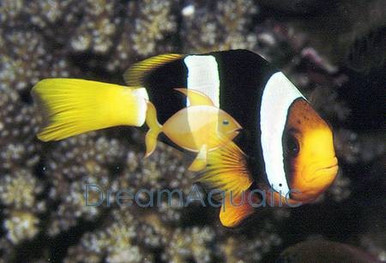 Clarkii Clown Fish - Amphiprion clarkii The Clarkii Clownfish or the Yellowtail clownfish (Amphiprion clarkii) is a widely distributed clownfish. It is found in tropical waters, in lagoons and on outer reef slopes, from the Persian Gulf to Western Australia and throughout the Indian Ocean and Pacific Ocean as far as Melanesia and Micronesia, and as far north as Taiwan, southern Japan and the Ryukyu Islands. The Clarkii Clownfish is a spectacularly colourful fish, with vivid black, white and yellow stripes, though the exact pattern shows considerable geographical variation. There are normally two white bands, one behind the eye and one above the anus. The tail fin may be white or yellow, but is always lighter than rest of the body. The Clarkii Clownfish are a popular aquarium species. They are omnivorous, and in the aquarium will readily eat brine shrimp. They will regularly host in many sea anemones in the home aquarium. The Clarkii Clownfish, a.k.a. Sebae Clown, is a beautiful Clownfish that has a higher profile than most clownfish. These Clowns have a yellow-orange body with vertical white bands along their body. They do extremely well in the aquarium and are very peaceful. The Clarkii Clownfish does not need an Anemone to survive, but will accept many different Anemones as its host, including corals. The Clarkii Fish is probably the least picky when it comes to Anemones and will accept Carpet Anemones, Bubble Tip Anemones, Sebae Anemone, or Long Tentacle Anemones as its host. These fish will accept most fish foods and are perfect for reef tanks. More than one can be kept in the same aquarium. The Clarkii Clownfish are commonly found swimming amongst the tentacles of both large and small Anemones at spectacular coral reefs. The reason Clarkii Clown Fish are not found at deeper depths is because of the dependance of the Anemone to be in water shallow enough to feed the zooxanthellae within its tentacles. The Clarkii Clownfish build up a protective mucus covering on their scales that prevent the Anemone from being able to sting them. This may be accomplished in one of two ways: by the fish absorbing the Anemones own protective mucus, which the Anemone uses to prevent from stinging its own body, or it may be that the Clownfish produces its own reactive mucus to the sting of the Anemone. The Clarkii Clownfish have a very distinct swimming motion that is different from most fish. This is likely passed on through their genetic makeup from centuries of wiggling within the tentacles of Anemones. As the Clarkii Clown Fish wiggles within the stinging tentacles the Anemone's mucus is likely smeared over the ClarkiiÍs body, which then protects it from additional stings. The reason that this theory is believed over others is the necessity of the Clarkii to re-acclimate itself after it has been away from the Anemone for an extended period of time. When returning to the Anemone it then has to acclimate itself again or else it will be stung. This protective mucus covering, whether removed from the Anemone's tentacles or produced by the Clown itself, allows the Clownfish to stay within the Anemone which in turn gives the Clownfish protection from predators. Likewise, Clownfish are known for their territorial and protective nature of guarding the Anemones from any approaching predators. The little Clownfish will fight off intruders to protect its home at all costs. They will dart out from the tentacles to nip at the intruder and then shoot back into the Anemone for protection. Butterflyfish at the reef are very interested in eating the Anemone and the Clownfish will fight off even the largest Butterfly that approaches. Clownfish will also feed the Anemone with food it has captured in the water. These incredibly beautiful and intriguing fish are commonly orange, red, or pink with head or body stripes of white. Habitat:
The Clarkii Clownfish are the most common to be aquacultured in the United States. In the wild they live in small groups with one large dominant female, one smaller sexually active male, and a handful of smaller males and juveniles. When the female is lost the largest male will then change sex and become the dominant female with the other Clowns moving up the ladder behind it. The Clark's Clownfish is also known as the Clark's Anemonefish, or Clarkii Clownfish. It has a reddish-brown base color with white stripes and an orange forehead. The anal fin is white with a yellow stripe on the top and bottom. Tank bred specimens are currently available for purchase. Minimum Tank Size:
Clark's Clownfish is one of the most hardy, and therefore, most common clownfish in home aquariums. A 30 gallon or larger aquarium containing an Anemone host such as Macrodactyla doreensis is desirable. It is semi-aggressive towards other clownfish and passive tank mates. Feeding and Diet:
The Clark's Clownfish diet consists of almost any meaty food items and herbivore preparations.