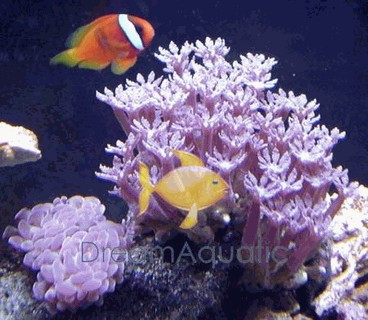 Clove Polyps - Clavularia species Clove Polyps are quite easy to maintain and are a valid choice for new reef aquariums or beginners or mature and experienced hobbyists. With not much to be cautioned about, Clove Polyps of the Genus Clavularia are morphologically quite attractive. Their vivid colors and patterns make them an interesting add on in your marine aquarium. This article explores the various aquarium relevant informative aspects of Clove Polyps. Other names:
Hailing from the Family Clavulariidae, the scientific name of Clove Polyps is Clavularia species. The other common names of Clove Polyps are Glove Polyps, Eight Tentacle Polyps and Encrusting Polyps. Origin or natural range:
Clove Polyps originate from the Indian Ocean and the Pacific Ocean in a South-East Asian country, Indonesia. Color:
Clove Polyps occur in a broad spectrum of colors such as brown, green, tan, pink and white. Morphology:
Clove Polyps have long and big polyps with feathery, eight-leaved, pale brown or grey colored tentacles. This is the key physical feature of the Family Clavulariidae. The tentacles are approximately 4 inches long when open and they get reduced to half that is, 2 inches, when closed. Compatibility:
Clove Polyps are semi-aggressive in nature as compared to the other marine invertebrates. Habit:
When closed, Clove Polyps retract their polyps fully, so much so that the closed heads are visible. Habitat:
Clove Polyps are colonial in nature with many polyps anchored to a live rock. The Clavulariidae species spreads on anything adjacent to it and may form mat like structures or lumpy masses. Clove Polyps live on the sloppy areas of the reefs with the surrounding water having tidal current or the Clavularia species live on sediment lagoons. Breeding:
Clove Polyps breed easily and rapidly to result in a mat like structure or lumps. When spreading in your marine aquarium, Clove Polyps may grow over everything adjacent to them, be it on rocks or on even other corals. Therefore, keep the other corals in your reef aquarium, away from them. Growth environment in your marine aquarium: