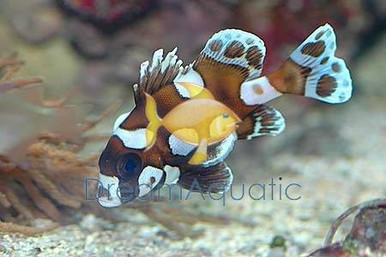 Clown Sweetlips - Grunts Sweetlips The Clown Sweetlips is whitish with brown spots over fins and upper body. This species belongs to the family Haemulidae, which includes other sweetlips and grunts. The Clown Sweetlips is the most common in the genus Plectrohenchus. The Clown Sweetlips Juveniles, under about 3 inches, are brown overall with black-bordered white spots and white-and-black fins. As they grow they develop brown spots on a white background, which become more numerous as they age. Not only is there a dramatic color change, but there is also a radical transformation in size of the Clown Sweetlips. Besides appearance, another endearing quality of the Clown Sweetlips fish is its swimming behavior, which is similar to that of a Clownfish. The Juveniles undulate their bodies and scull with their enlarged pectoral fins when they swim or when they hang in the water column. These exaggerated swimming movements, as well as the juvenile coloration, apparently function to deter would-be predators. The Clown Sweetlips look like a noxious, or distasteful, flatworm and are hence avoided by predators as a result. Although mimicking a noxious flatworm may help prevent the sweetlips from becoming predator chow, it does not give it immunity from aggressive species in the aquarium. The big wagging tail and waving paired fins of this species are perfect targets for combative tankmates, such as damselfishes, hawkfishes, certain angelfishes, tiggerfishes, pufferfishes and porcupinefishes. Therefore, another prerequisite for maintaining a small clown sweetlips is to house it with passive species. During the day the Clown Sweetlips fish hide in crevices, under ledges, among branching corals and between or under coral boulders. At night they come out to feed, the adult's diet consisting of mollusks, crustaceans and small fish. The Clown Sweetlips juveniles are also somewhat reclusive during the day. Therefore, it is important to provide them with good hiding places to reduce stress levels. Juveniles tend to starve in captivity and must not be kept with aggressive tank mates. Some varieties get very large over time. Very often wild caught using chemicals which have a delayed effect on their health. This can explain a sudden death as a captive juvenile. Small sweetlips will be fine in a community tank with inverts but as it grows will start to be a threat to snails, polychaete worms, ornamental crustaceans including shrimp, and serpent stars Size:
The Clown Sweetlips grows up to 29 inches. The small size will come to you generally 1_ to 2 inches; the medium generally 2 to 3 inches; the large generally 3 to 5 inches. Tank Conditions:
The Clown Sweetlips prefers a tank of at least 150 gallons with plenty of places to hide & swim. Keep water quality high (SG 1.020 - 1.025, pH 8.1 - 8.4, Temp. 72 - 78Á F). Habitat:
It ranges from islands in the Indian Ocean, east to Samoa, north to southern Japan and south to Australia, and is typically found in waters 3 to 100 feet in depth. Feeding and Diet:
Unfortunately, one of the biggest drawbacks to keeping the Clown Sweetlips fish in captivity is getting it to feed. The shrimp used are able to live in waters of a wide range of salinity and will survive in full-strength seawater. In order to induce the fish to feed it is best that the Clown Sweetlips is not kept with aggressive feeders that will also eat these shrimp, such as squirrel fishes, soldier fishes, groupers, snappers, goat fishes and large wrasses. Sometimes the Clown Sweetlips fish eat for weeks or months and then suddenly cease and die for no apparent reason. This may indicate the fish was captured with drugs (cyanide), the effects of which may not manifest themselves immediately. The death may also be the result of some key nutritional ingredient missing from their diets.