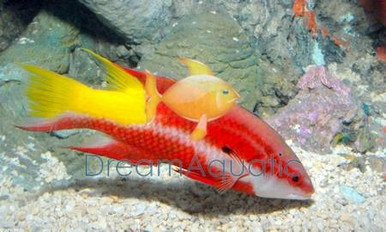 Cuban Hogfish - Bodianus pulchellus The Cuban Hogfish, also known as Spotfin Hogfish, has a pinkish orange head. However, the rest of the body is a combination of red and yellow. But, the tail is somewhat lighter in colour. The brightness and positioning of colour can vary considerably depending on the age of the fish. It has long nose and large lips. They are semi aggressive in nature. Generally, they can be kept with other fishes but it is not a good idea to keep one male Cuban hogfish in company of another male. This generally results in fight. Besides, they should not also be kept with smaller fishes, squids as the later form a major part of the diet of this hogfish. However, the comparatively compatible speciesÍ with which Spotfin Hogfish can be kept with- are: Foxface and rabbitfish, grunts and sweetlips, hawkfish, parrotfish, puffers, tangs and surgeons, live corals. The Cuban Hogfish are hermaphrodites. They change from females to males. This is the reason why it is very difficult to distinguish between the two sexes. Therefore, it becomes very difficult to make them breed in captivity. However, when they do breed they are group spawner. Maximum Size:
This species grows to over 2 feet in length. General Size:
This Cuban hogfish is about 9 inches in length. Minimum Tank Size Suggested:
A 100-gallon or larger aquarium provides a very good environment for this species of hogfish. Tank Conditions:
The Cuban Hogfish should ideally be kept in temperatures between 72 and 78 degree Fahrenheit. The Ph balance of the water should also be maintained between 8.1 and 8.4 as they prefer alkaline content of the water to be high. The specific gravity should be maintained ideally between 1.020-1.025. The tank must be decorated with artificial caves and rocks; as these rock structures simulate their artificial coral reef environment. Habitat:
The Cuban Hogfish is mainly found in the Western Atlantic region. They are concentrated mainly at South Carolina, USA and Bermuda to Honduras, Madagascar. South America, including the Antilles, is also known to be the habitats of Cuban hogfish. Besides, this species is also found at Sao Tome Island. They do not swim at some specific depth levels. This makes them difficult to catch. Feeding and Diet:
Carnivorous, preys on other small fishes and also on other invertebrates. The mature adults eat snails, worms, mussels, small fishes. Shrimps and squids also form a major part of their diets.