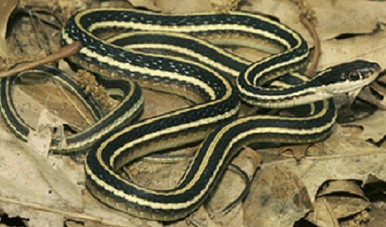 The ribbon snake is a member of the garter snake group (the genus Thamnophis). Ribbon snakes can be distinguished from their close relatives the true garter snakes by their slender body shape, glossy scales, and relatively longer tails. Like the true garter snakes, ribbon snakes have prominent lateral body stripes and are shy, non-poisonous reptiles. Appearance
There are four sub-species of ribbon snake: the eastern ribbon snake (T. sauritus sauritus), the northern ribbon snake (T. sauritus septentrionalis), the blue striped ribbon snake (T. sauritus nitae), and the peninsula ribbon snake (T. sauritus sackenii). These snakes are all an overall reddish brown, tan, or black with three prominent stripes running the lengths of their bodies. These stripes may be yellow, green, brown, or even (in T.sauritus nitae) light blue. Their bellies are most often lighter in color (bright white, off-white, yellow, or green) but may also be dark brown or even black. As in many snake species, the variability of specific colorations is the rule rather than the exception. Specific habitat adaptations and intense selection (primarily through predator pressures) generates an extremely wide range of color patterns. The eastern ribbon snake is between 18 and 34 inches long while the northern ribbon snake is shorter (between 16 and 26 inches long). Females tend to be somewhat longer and also thicker than males. The tail of a ribbon snake is quite long (around 1/3 of the total length of the snake). This longer tail, as mentioned above, is an excellent way to distinguish ribbon snakes from the shorter tailed "true" garter snakes. Range
Ribbon snakes are widely distributed throughout the United States. The two sub-species expected to be found in Western Pennsylvania are the eastern and northern ribbon snakes. The eastern ribbon snake is found throughout the eastern United States from southern Maine (and Ontario, Canada) down to parts of Florida westward to the Mississippi River. The northern ribbon snake is found in northern New England across New York westward through Western Pennsylvania, Michigan, Illinois, and Wisconsin. Interestingly, an isolated population of northern ribbon snakes is located in Nova Scotia, Canada. Habitat
Ribbon snakes can be found in a great variety of specific habitats. The key factor for their presence is the proximity of a water source in which the snakes can swim and capture aquatic prey. Ribbon snakes are found in forests and rocky hillsides, and most frequently are seen climbing or resting in the dense vegetation around a bog, lake, marsh, pond, stream, river, or even seeping spring. Ribbon snakes may use a variety of animal burrows as shelters but seem to prefer to be out in the dense, but sunlit vegetation. They rely on their camouflaging colorations both for protection and for concealment from potential prey.