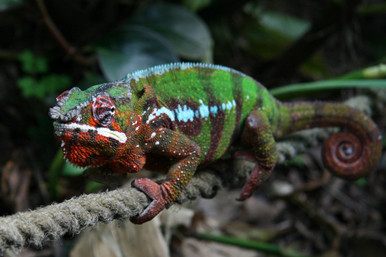 The Panther Chameleon Furcifer pardalis is a spectacularly colored lizard. They come in many shades and degrees of brilliant blues and greens, and even black. They can have patches of red, yellow and orange on the head, and can also have vertical bars of reds and blues. And as with any chameleon, watching their color change is always fascinating. Panther Chameleons are moderately-sized lizards, typically males will reach about 17" (45 cm) in length, though they could reach up to 22" (56 cm). The males are more vibrantly colored than the females, though the coloring they have varies depending upon the region where they originate. Females, no matter what region they come from, tend to be brown or tan, sometimes with patches of pink or bright orange. They have a friendly face and the male Panther Chameleons have slight ridges protruding from their head. They have cone shaped eyes that can rotate and focus separately on two different objects at the same time. There is a small opening at the end for the pupil, giving them keen eyesight with which they are able to pinpoint small insect prey at long distances. Watching them eat and the speed at which their tongue darts from their mouths to catch prey, is astounding. The Panther Chameleon is amicable when it comes to handling. Captive-hatched specimens are typically hardy and relatively stress-free. They make wonderful pets for those willing to meet the chameleon's requirements. When Madagascar relaxed its restrictions on exporting reptiles, the Panther Chameleon was a popular export. Exportation numbers grew from 1986 to 1990 with more than 2,000 specimens being legally exported. Since this time, the Panther Chameleon has been bred in fairly large numbers by devoted reptile breeders and captive-hatched specimens are available to hobbyists.