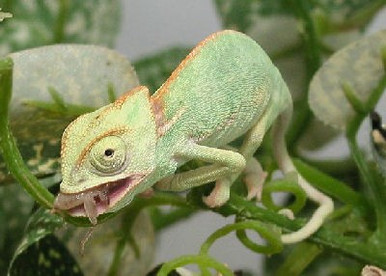 The Veiled Chameleon Chamaeleo calyptratus, also known as the Yemen Chameleon, is an exciting chameleon to keep. These lizards are tree-dwellers designed for camouflage in both body shape and coloration to blend in with their surroundings. Veiled Chameleons have a flattened, arched body shape that models a leaf. Males are green marked with bold bands and splotches of brown, blue and gold. Females are green with white markings, or when in breeding mode, are dark green marked with yellow and blue. They have a fascinating color changing ability, the brighter the foliage, the brighter the chameleon. The surroundings however, are just one factor that can stimulate Veiled Chameleons to change color. Other factors that affect the prominence of their color include their mood, the temperature, and their overall health. Veiled Chameleons not only have beautiful coloration, but are moderately large sized lizards. Typically males will reach up to 19" (48 cm) in length, but they could reach up to 24" (60 cm). Their feet are cleverly adapted to gracefully traverse leaf laden branches. Their eyes are cone shaped and can rotate and focus separately. They have a small opening at the end for the pupil, giving them keen eyesight. They are able to pinpoint small insect prey at long distances. Watching them eat and the speed at which their tongue darts from their mouths to catch prey, is astounding. The Veiled Chameleon is generally one of the easier of the chameleon species to keep. It is tolerant of a relatively wide range of temperature conditions and has a high reproductive potential, but it does need a large space. They are also rather aggressive chameleons and should be kept alone as adults. Unlike most of their relatives this chameleon is an omnivore eating both insects and plant material.