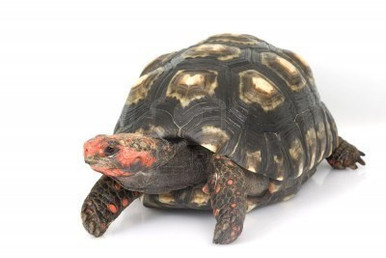 Chelonoidis carbonaria or the Cherry Head Red FootTortoises are medium sized tortoise commonly found in the savannah ranges and the forest edges around the Amazon River Basin. They are endemic t some parts of Central America and South America and have even been transported and bred in the Caribbean Islands in large numbers. They normally grow up to 12 inches in carapace length but a few 16 inches and longer Cherry Head Red Foot Tortoises have also been spotted. The average weight of these tortoises is around 30 pounds. The Chelonoidis Carbonaria is a popular pet because of its hardy nature, adaptability and ease of pet care. Their carapace is usually dark brown or black colored with lighter yellowish patches at the center of each scute. The marginal scutes are mostly yellow or golden. Their carapace is oval slightly elongated as if stretched lengthwise. It is smooth, keelless and highly domed. The male Cherry Head Red Foot Tortoise has a huge concave plastron whose color might vary. The plastron is usually thicker along the rim. The mid-section of the plastron curves towards the inside and gives the impression of a waist. The head is comparatively small and appears flat from above. Their upper jaw is slightly notched. Males are more brightly colored than females and colors form an important part of the courting and mating ritual.The limbs are covered with red scales that give them the name Red Footed. Males have long and heavier tail while females have short and conical tails. The Cherry Head Red Foot turtles are an active species that can be seen throughout the day. Rainy season marks the height of their activity and this is the time when mating normally occurs.Throughout the period of courtship and mating the male Cherry Head Red Foot Turtle chuckles. Hatchlings are quite different from their parents. They are round and comparatively flat. TheGeochelone Carbonaria has a long lifespan that might extend over 50 years. The Cherry Head Red Foot Tortoise Habitat The Cherry Head Red Foot Tortoise is endemic to hot and humid climates of the Amazon Forests. Their natural habitat is highly humid and the temperature might range from 30 to 35 degrees Celsius. The Geochelone carbonaria is not temperature tolerant and many of them die due to unexpected rise or fall in temperature. It is important to keep in mind when designing their captive enclosure that the temperature is maintained between the optimum range at all times throughout the year i.e. 85-90 degrees Fahrenheit.The humidity should be maintained around 75-80 % by frequent misting. The terrarium should be sufficiently big to allow freedom of movement. A UVB and a heating lamp should be placed over a dry spot to be used for basking. The UVB light helps the tortoise synthesis Vitamin D. The Cherry Head Red Foot Tortoise Diet The Cherry Head Red Foot turtle is mostly a herbivore and feeds on a variety of fruits, grass, leafy vegetable and stems. In captivity you can feed them mangoes, oranges, grapes, cherries, berries, melons, cabbage, spinach, mushrooms and flowers. Once every week powdered calcium and vitamin supplement should be mixed with their food.