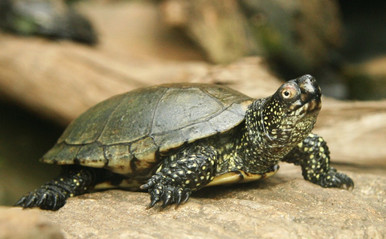 The Emys orbicularis or the European Pond Turtle was once a widely distributed throughout Europe and North America. However, now they have become extinct from Great Britain, Sweden, Netherlands, Denmark and Estonia and are sparsely distributed in parts of Europe and North America. Commonly a fresh water species the European Pond turtle is still found in France, Spain, Italy, Romania and other European countries and Balkan States. The European Pond turtlevaries in appearance throughout its range. However, they can be easily distinguishedby bright yellow or gold speckles on its black or dark green carapace. They are very attractive and brightly colored. The coloration and patterns make it a widely sought after turtle among per turtles. The adults tend to be darker while the hatchlings and juveniles are dark olive colored and lighter green than adults. Many subspecies of the Emys orbicularis,as they grow up tend to be entirely black without any yellow or gold specs. The color of the iris also varies from blood red to brownish yellow or completely yellow. Females in general have yellow eyes and on rare occasion white. The females have larger plastron then the males. They have a heavy domed shell that looks more or less like a helmet. The head, throat and limbs are all black with speckles of yellow. They have sharp claws and webbed limbs that might resemble a tortoise. European Pond turtle Habitat The European Pond turtles as the name suggests are endemic to still water bodies mostly ponds and marshes. They might also inhabit lakes or slow moving streams and swamps with plenty of aquatic vegetation and natural debris. They prefer to live in wetlands or freshwater bodies with significantly wooded, forest landscape. The females prefer to lay their eggs around the water body but both male and female tend to move away from water in search of food. The Emys Orbicularis are medium sized turtles that can grow up to 15 inches. The hatchlings prefer shallow water and the adults prefer to stay in deeper parts leaving water only to bask, lay eggs or rarely to eat. A 100 gallon water tank is recommended for single turtle and for every additional turtle the water tank should be upgraded by 50 gallons. They prefer moderate humid climate but are quiet temperature tolerant and can live an active life as long as the temperature doesnÍt get too hot or too cold. Though mostly aquatic the European Pond turtle loves to bask once in a while. A raised basking platform lined with sand, saw dust and gravels should be fitted under a setup of UVB light and a regular heating lamp. You can place artificial or natural plants in the aquarium. The European Pond Turtle is a very shy species and hobbyists are advised against keeping them together with other species. The European Pond Turtle Diet The European Pond turtle are essentially carnivores throughout their age. The lack of vegetation in their habitat wonÍt affect them much. They mostly feed on fish, crustaceans, tadpoles, mollusks, amphibians and worm. Female Emys orbicularis often eat fruits and vegetables. In captivity you can feed them commercial turtle pellets, chicken liver or chunk of meat sprinkled with calcium and multivitamin.