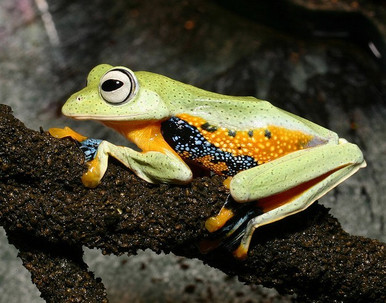 Frogs are amphibians in the order Anura (meaning "tailless", from the Ancient Greek an-, without + oura, tail). Most frogs are characterized by a short body, webbed fingers and toes, protruding eyes, cleft tongue and the absence of a tail. They are excellent jumpers and many of their anatomical characteristics, particularly their long, powerful hind legs, are adaptations to improve jumping performance. Due to the permeable nature of their skin, through which they can breathe, many frogs are semi-aquatic or inhabit humid areas. They also live on land even in arid regions and some species inhabit trees or burrow in the ground. They typically lay their eggs in water and their larvae, called tadpoles, are aquatic and have gills and tails. Most tadpoles are herbivorous but adult frogs have a carnivorous diet, mostly consisting of insects, spiders, worms, slugs and snails. Frogs produce a wide range of calls particularly in their breeding season. Frogs are widely distributed, ranging from the tropics to subarctic regions, but their greatest diversity is found in tropical rainforests. Consisting of about 4,800 known species, they are among the most diverse groups of vertebrates and first appeared in the fossil record some two hundred and fifty million year ago. Frogs are an important part of the food chain and the major consumer of land invertebrates. Some produce toxic secretions but despite this, many are eaten by birds, mammals, reptiles and fish. In addition to their ecological importance, frogs have many cultural roles, such as in literature, symbolism and religion, and they are also valued as food for humans. Populations of some frogs are in significant decline, some species have become extinct and the number of deformities among frogs is increasing in some areas. A distinction is often made between frogs and toads on the basis of their appearance but this has no taxonomic validity. The only family exclusively given the common name "toad" is Bufonidae (the "true toads") but many species from other families are commonly called "toads", while members of the toad genus Atelopus are referred to as "harlequin frogs".