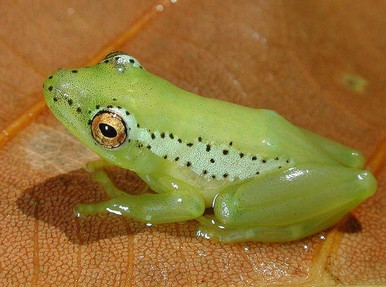 A rather small frog (males 21_24 mm) from the eastern savannas. Body and snout elongated, snout pointed. In the breeding season, and possibly also outside it, males have black spinosities on the hindfeet and sometimes on the hindlegs and ventrum. Males larger than females. Pupil horizontal. Colour in life translucent green, yellow or brownish with a conspicuous white canthal and dorsolateral line delimited by rather large black chromatophores. The green colour disappears after preservation, so the white lines are only indicated by two rows of chromatophores on those individuals that were green in life, still visible in the brown specimens. Ventrum whitish. Throat and underside of limbs green in the green specimens, whitish in the others. The females may all be green. Hyperolius parkeri has a voice quite different from other Hyperolius, males which are larger than females, a strange calling position and male spinosities. Anatomical studies may reveal that it should be separated into its own genus.