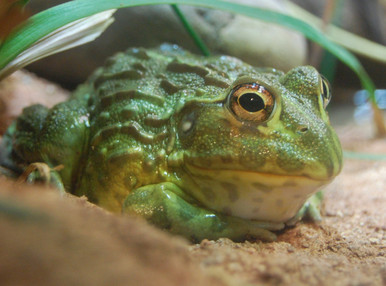 The most obvious characteristic that differentiates Pyxicephalus adspersus from other frogs is its size; its one of the biggest, second only to the Rana goliath of the Congo basin. Individuals can weigh up to 2 kilograms (4.4 lbs). Unlike most other species of frog, the P. adspersus male is larger than the female. The male can be up to 24 cm (9.5 in.) long and the females are about 12 cm (4.45 in.). Their skin color is a dull green; the males have yellow throats and the females throats are cream-colored. Juveniles differ in that they are bright green and have a yellow stripe down their back. This stripe fades away as they mature in about one and a half to two years. Also, older frogs have more obvious skin folds than the younger ones. The body of the frog is very broad, with a short rounded snout, protruding jaw, and tooth-like projections in its lower jaw. It has a large mouth, sharp teeth and very little webbing on its feet. Another way that this bullfrog differs from other frogs is that it has very strong hind legs, which it uses to dig holes in the ground, so that it can estivate during the dry season. It makes a dry, watertight cocoon for itself, which prevents the evaporation of body fluids; it loses approximately half of the water that a frog without a cocoon would lose. The frogs can actually survive for several months in dry soil by absorbing water stored in the bladder. Once the rainy season starts, the moisture will seep into the ground and soak the cocoon. Once it softens enough to split open, the frog eats it.