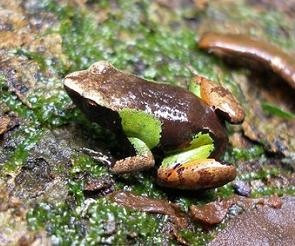 Mantella pulchra is an average-sized Mantella. Male specimens reach 2.0 centimetres in length from snout to vent; the females are only slightly larger, reaching 2.2 centimetres long. There is some overlap in size between the sexes, and size is usually not a consistent means of sexing. Females are often noticeably bulkier than males, and have a higher back arch, which is a somewhat more reliable means of sexing. However, M. pulchra is still one of the more difficult Mantellas to sex. The Beautiful Mantella is primarily black or dark brown. The dorsum and head are entirely black, while the flanks bear mint or metallic green splotches. The hind legs also possess orange markings to advertise the frogs' toxicity. The belly is primarily black, speckled with green or yellow. In terms of colouration, there is little difference between Mantella pulchra and the similar, closely related M. baroni. Mantella pulchra differs from M. baroni in that it is smaller and more slender, and it is more predominantly black. The only other differences are the fact that M. pulchra cannot convert its pumiliotoxins into allopumiliotoxins, and the locality of the two species.