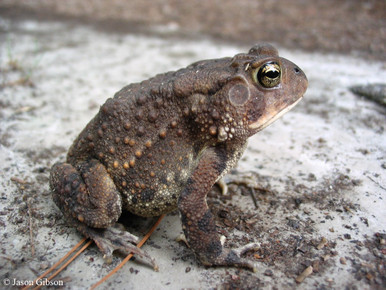 The Southern Toad (Anaxyrus terrestris) is a medium-sized (approximately 3 inches, the largest recorded toad was 41?2 inches) true toad native to the southeastern United States, from eastern Louisiana to southeastern North Carolina. It is most common in areas with sandy soil.[citation needed] Its coloring is usually brown but can be red, gray, or black. It can be kept in a small 5-gallon aquarium lined with unfertilized potting soil, sand, or reptile substrate, as it is a burrowing species. It also needs somewhere to soak, commonly a small water-filled bowl deep enough for it to sit in. The Southern Toad will eat just about any insect that is alive and that can fit in its mouth. The Southern Toad is nocturnal, emerging from its ground burrow around twilight to forage for insects. It spends daylight hours sleeping in its burrow.