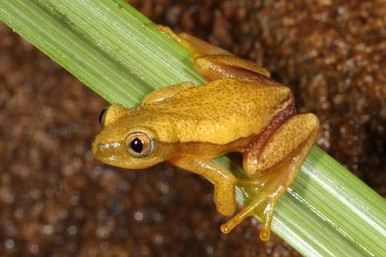 A rather large Hyperolius (males 25-33 mm, females 30-35 mm) from the eastern lowlands of Africa with a long snout. Pupil horizontal. Dorsum uniform green or yellowish with an indistinct hourglass pattern. The southern populations especially can be separated into a phase J, straw-coloured with hourglass-pattern, and a uniform light tan to lemon yellow or light green phase F. Although lacking distinctive characters adult H. tuberilinguis are easily recognisable among the east African lowland fauna by their pointed snout. H. tuberilinguis is quite similar to H. kivuensis, met further inland in eastern Africa, but the latter has a more pointed snout and a conspicuous dark lateral band. There is a great similarity in morphology, voice and "general appearance" between H. concolor, H. balfouri, H. kivuensis and H. tuberilinguis. They can be regarded as members of the same superspecies (SchiÀtz 1975). The tadpole reaches a length of up to 46 mm (14+32) with a tooth formula of 1/3. It is brown with golden and bronze spots on the light underside.