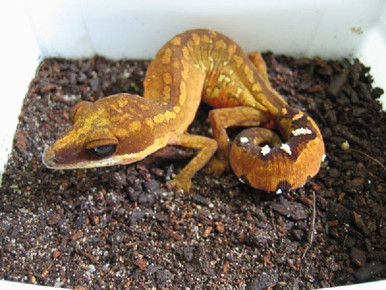 The cat gecko, Aeluroscalabotes felinus, is a species of gecko found in Indonesia, Malaysia, Singapore, Cambodia and Thailand. It is the only species within the genus Aeluroscalabotes, and the only genus found within the taxonomic Subfamily Aeluroscalabotinae. It is commonly called the cat gecko because of its habit of curling up with its tail around itself when it sleeps, similar to a cat. The cat gecko is a lightly built gecko, typically red-brown in color with white spots on its body, and solid white under its chin, and sometimes to the belly. Some specimens have brown blotching along the back. It is considered to be one of the more primitive geckos, and is physically quite similar in body structure to the few fossils of early geckos which have been discovered. They can grow to approximately 18 cm (7 inches), with males typically being smaller than females. Unlike most arboreal geckos it does not have toe pads (setae) which allow it to climb sheer surfaces. It instead relies on small retractile claws, and a prehensile tail.