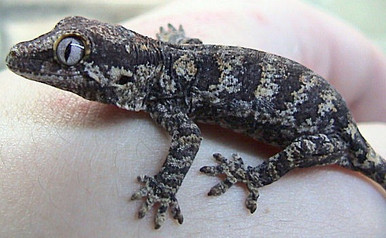 The gargoyle gecko, gets its name due to the large nodules protruding from the skull, a characteristic found in no other species member. The body is robust, and the tail has some prehensile ability. Many wild-caught gargoyle geckos have regenerated tails. While their coloration is invariably more vivid at night, most gargoyle geckos have a rather drab marbled pattern. A few specimens, however, have a much more vivid pattern often consisting of bold longitudinal stripes and/or orange/red body coloration. The gargoyle gecko is extremely hardy in captivity, and it generally thrives with minimum care. In the wild, the gargoyle geckos diet consists of flowers, lizards, insects, spiders and pollen. There is a dramatic difference in gargoyle geckos between reproductive life and overall longevity. Under ideal conditions, gargoyle geckos can live to 15 years; however, it is unusual for females to lay viable eggs after their fifth or sixth year.