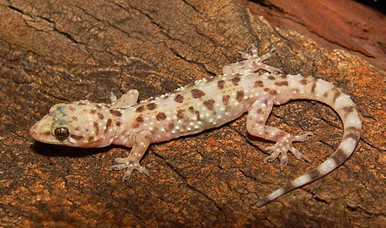 A small (up to 60 mm or 2.4" from snout to vent) light yellow, pink, peach, or reddish-tan lizard with dark reddish-brown spots or crossbars on the body and tail. The scales are small and granular and the skin is soft and translucent. A faint, blue-gray tint is visible through the skin above each eye. The underside is white or pale cream and often covered with faint dark speckles. The upper surfaces are covered with small, pale tubercles distinguishing this lizard from the similar looking Western Banded Gecko. The toes are equipped with claws and wide pads that aid in climbing. The eyes are large relative to the head, there are no eyelids, and the pupils are vertically elliptical. DISTRIBUTION:
This lizard is native to the Mediterranean and west Asia. It has been introduced to urban areas in Arizona including Phoenix, Tucson, Yuma, Casa Grande, Gila Bend, Marana, and Douglas. HABITAT:
In our state this introduced lizard appears to be restricted to cities and towns within the warm desertscrub and Semidesert Grassland communities. It is commonly encountered at night on the exterior walls of buildings. BEHAVIOR:
The Mediterranean House Gecko is nocturnal. It uses its toe pads and claws to climb on vertical walls and even upside down on ceilings. It waits near lamps to ambush insects that are attracted to the light. When captured or fighting it makes a squeaking noise. Males make an advertising call consisting of several clicks. DIET:
The Mediterranean House Gecko eats insects. REPRODUCTION:
Breeding might occur year-round in Arizona. Each adult female lays up to 3 clutches of 2 hard-shelled eggs per year. Eggs are often laid in communal nests.