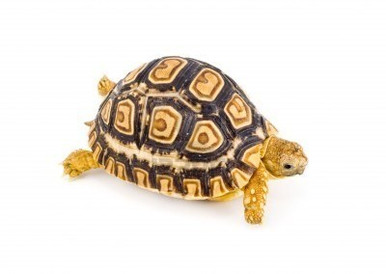 Leopard tortoise is believed to be the fourth largest tortoise in the world. Their scientific name is GeochelonePardalis and the adults can grow up to 18 inches and weigh up to 18 kilograms. They are found throughout the African savannas. Their shell pattern is amazingly distinctive. The carapace has yellow colored background with splashing of jet-black equally spread over the shell. Carapace is highly doomed and is higher than half its length. The pyramid shaped scutes add to their beauty. Their large shell helps in protecting the softer body and as soon as they sense any danger, they retract their limbs back into the shell and thus no part is left vulnerable. They are more defensive than offensive. Geochelone Pardalis is a solitary animal and most of the time is busy grazing on plants, with the help of its sharp beak-like mouth. Leopard Tortoises are swift runners and great climbers. Their life span is also greater than other tortoise species and they can live up to 100 years. They attain their sexual maturity in between 12-15 years but their size also matters as much their age. Males possess longer tails and more elongate bodies than females. Often their plastron is depressed. During mating, males gently woo their counterpart by ramming them and intromission is complemented by a cough-like grunting noise produced by males. Females can lay clutches of 5 to 15 eggs into a burrow in the ground which is safely covered to protect the young from the predators which are mainly cats, dogs and humans. Geochelone Pardalis Habitat For their natural habitat, Leopard Tortoises favors semi-arid, thorny to grassland locale. They can live both in very hot and very cold weather and an abandoned fox, jackal or anteater holes serve as the icing on the cake. For an artificial habitat one needs to give them a lot of space both to grow and to roam about. A terrarium of at least 4 feet by 8 feet should be provided with lighting and heating equipment. UVB light is essential to produce vitamin D3 lack of which can eventually lead to tortoiseÍs death and the temperature of the accommodation should vary between 24 and 32 degree Celsius. Providing a water dish is also important, which should be shallow enough to protect the tortoise from drowning and at the same time large enough to allow them to soak in it. If the climate allows, keep Leopard Tortoise out of doors as direct sunlight would do them good and they can also graze on plant matters. Geochelone Pardalis Diet Geochelone Pardalis are herbivorous amphibians and they should be provided with a diet that is low in protein and high in fiber. In wild they feed on grasses, weeds and cactus. In captivity chopped mixture of veggies and with romaine lettuce and grass would be a good option. Food high in oxalates like spinach and beet greens and fruits should be avoided as these items upset their digestive system. Their food should also be sprinkled with calcium supplements.