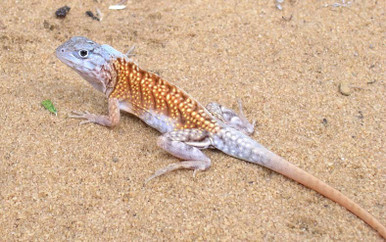 From the semitropical arid and semiarid areas of south and southwest Madagascar that have a summer monsoon rainy season. It is common in this hot habitat of sparse spiny bush vegetation and sandy soils. Also known as the Malagasy Anole and the Madagascar Iguana. An interesting lizard, due to the prominent third eye on top of the head. This "pineal eye" has a lens and retina but can only sense light and its function is not fully understood. It is a fairly typical looking lizard, clad in a pattern of earth tones. Approximate size is 7 to 9_" and they can live for 4 years or more. Males are territorial and should not be kept together, females get along better and several can be kept with one male. Temperature:
Daytime 80 to 88ÁF with about a 5 to 10ÁF drop at night. A hot basking spot is needed at around 90 to 100ÁF. Provide a warm and a cool side in the enclosure so that they can choose a comfortable temperature at any given time. Seasonal variations in temperature may be beneficial but should not drop below 65ÁF for long periods. In southwest Madagascar, the lowest temperatures are in July, ranging from 59 to 81ÁF. The highest are in February and range from 73 to 90ÁF. Humidity:
Normally low, 25 to 40%, with higher humidity and misting to simulate the summer rainy season. In southwest Madagascar, the lowest rainfall is in August at .22" for the month, with the highest in December at 3.92". Light:
UV light must be provided along with a basking light. An overall high light intensity is preferred. Use a timer to provide a 12-hour day during the summer season. Feeding:
Somewhat omnivorous. Will eat mealworms, crickets, moths, earthworms, roaches, beetles, etc. May also eat flowers and mashed fruits. Be sure to give a good quality vitamin/mineral supplement once or twice a week. A shallow bowl of clean water should be available most of the time. Habitat:
Even though these are not large lizards, they still need a fairly large tank. Provide a 20 or 29-gallon for a group and use a screen lid. Set it up as a desert/savanna habitat with a basking spot. The substrate can be sand or a mix of soil and sand, deep enough for them to burrow in. Furnish it with rocks, caves and climbing branches. Be sure to provide plenty of hiding places, placing one on the cool side of the tank (near the water dish) that is occasionally sprayed with water will provide a humid retreat. This can be helpful to alleviate shedding problems and may be beneficial in other ways. Seasonal Cycle _ Brumation:
A winter cooling period may be provided starting in December and lasting for about 3 months (rainy season would start in June and last for 3 months). The seasons are opposite south of the equator so a period of adjustment is needed to acclimate them to the Northern Hemisphere. Otherwise, the cooling season would start in June and the rainy season starts in December. Lower the temperatures and shorten day length gradually over about 2 weeks to 68 - 72ÁF and about 8 or 9 hours of light. Continue to provide water during the process and feed them less or not at all if they have no appetite. After the cooling period, gradually bring things back to normal again. Sexing:
Males are larger and more dominating. Also, they may display breeding colors and courting behavior. Breeding:
Not much is known but it should be attempted. After a winter cool down period, a warmer, dry period would begin in the spring. Summer is when the monsoon rains come. Higher humidity and frequent misting should be provided at this time. Intense sunlight may also play a role in triggering breeding. It is unknown at which point mating may occur. Females lay several clutches with 2 eggs each during the breeding season. Hatching takes place in 4 to 6 weeks.