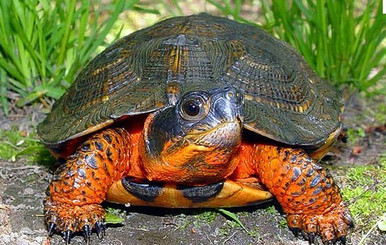 The Graptemys sculptaor the North American Wood Turtle as the name clearly suggests is a wood turtle endemic strictly to North American waters and landscapes. Its range extends from Nova Scotia in the North to Virginia in South and Minnesota in West. This North American turtle can grow up to 8 inches in carapace length. Its similarity with BlandingÍs turtle, bog turtles and spotted turtles. The primary feature that distinguishes it from others is the pyramidal pattern on its carapacial scutes. There are morphological differences in the North American Wood turtle found in different areas e.g. Those found in the west have a slightly paler coloration on the dorsal side. They have a rough carapace with grooves and ridges. These ridges are colored in patterns of black and yellow. The plastron is cream or yellow with dark blotches. The posterior end of the plastron is V-shaped. The plastron in juvenile and females is flat but a mature male turtle has a slightly concave plastron. Hatchlings have grey or brown plastron that changes to yellow or cream as they mature. The head and neck is pitch-black with some occasional gold or yellow spots here and there. The ventral parts of its chin, throat and limbs are orange to red with stripes of yellow. The male North American Wood Turtle outgrows females and a full grown 8 inches turtle can weigh around 1 kg. Males have long and sharp claws on their forelimbs. They have long tails almost the same length as their carapace. The North American Wood Turtle The Graptemys sculpta is endemic to New England, Nova Scotia, Michigan, Virginia and Canada. A major part of the North American Wood Turtle population is found in Canada. It inhabits slow moving fresh water bodies such as small streams, lakes and ponds. They are essentially found in water bodies with some depth and soft sandy bottoms and muddy banks. However these turtles are not much aquatic. They spend most of the spring and summer in woods, forests and fields. This is a highly terrestrial species of turtles. It would be a good idea to provide them with outside housing but in case that is not possible a 60 gallon water tank designed as a terrarium. It is important to note that the Graptemys sculpta habits change with weather. While they are terrestrial during spring and summer they tend to be highly aquatic during winters. The setting of the terrarium should either be changed with weather or should be equally divided into terrestrial area and aquatic area. Though they are highly temperature tolerant you should regulate the temperature around 70-75 degree Fahrenheit. A basking area withan overhead heating lamp and a UVB light is highly recommended.If you live in cold climate an underwater heater Is also advised. Keepers should keep in mind that the terrarium should have a profusion of plants. The North American Wood Turtle Diet The North American Wood turtle is omnivorous and eats an assortment of insects, worms, tadpoles, fishes, fruits and green leafy vegetables. For turtles kept in captivity a weekly dose of vitamin and calcium supplement should mixed in their meal and fed to them.