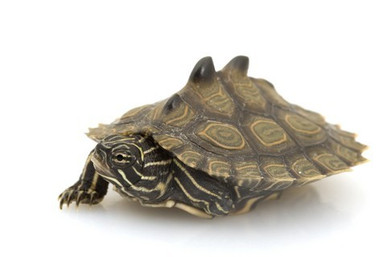 The Graptemys Nigrinodaor the Northern Black Knobbed Map turtle is a subspecies of the pond slider species of turtles. It is a medium sized turtle that can be found in the Mobile bay basin in Alabama, Coosa, Tallapoosa, Cahaba, Tombigbee, Black Warrior and Mississippi Rivers and smaller water bodies in proximity. The most distinctive feature of these turtles is the stegosaurus kind of spikes at the median of their carapace. The slightly domed carapace of the Northern Black knobbed turtle has the first four vertebrae protruding backwards in a knob or spike-like projections. The knobs are prominent in hatchlings and juveniles but slowly diminish as the turtle matures. In old females the keel almost vanishes leaving behind a tiny hump. This is a medium sized turtles. Female Northern Black Knobbed Map turtles overgrow the males and are almost twice their size. While males grow only to 4.5 inches the females may reach up to 8 inches carapace length. The adult Graptemys Nigrinoda has a dark olive brown carapace marked with yellow and black circular patterns. Hatchlings are more vibrantly colored and have a more contrast shade. The knob projections are compressed horizontally. They have narrow and small heads like most map turtles and yellow or olive stripes run across the complete length of its body. The plastron is a lighter shade of olive and has few stripes running across its length. The Northern Black Knobbed Map Turtle Habitat The Northern Black Knobbed Map turtles are map turtles are essentially fresh water turtles, found mainly in rivers or adjacent streams and swamps. The Graptemys Nigrinoda hibernates during the colder part of the year. The northern Map turtles live in deep water with lots of aquatic plantation and fallen logs and branches. In captivity a hatchling or a yearling can be kept in a 20 gallon water tank, around 2 feet in depth. As the turtle grows the water volume and depth should be increased. An adult male Northern Black Knobbed turtle should be kept in a 40-50 gallon water tank and full grown female needs at least 80 gallons of water. For every additional male turtle add 20 gallons and for every additional female add 40 gallons to the aquarium. They are very fond of basking. In their natural habitat the Northern Map turtles bask on fallen trees and slide into water on the slightest hint of danger. In some cases the females tend to move farther away from water. A setting of submersible filter, air pump and water heater is important because the Northern Black Knobbed turtles are not cold tolerant. A UVB light and heating lamp should be placed over the basking area to maintain the temperature range of 85-95 degree Fahrenheit. The water temperature should not fall below 70 degree Fahrenheit or the turtles would become less active. The Northern Black Knobbed Turtle Diet The Northern Black Knobbed Turtles are omnivores and eat crickets, beetles and aquatic insects. Fresh algae, hyacinth, romaine lettuce and commercial turtle pellets are welcome food.