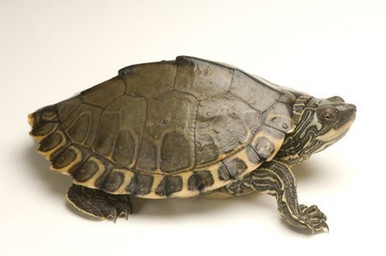 The Graptemys Gibbonsi or the Pearl River Map turtle is a large species of turtle endemic only to Pascagoula and Pearl River and its tributaries in Mississippi and Louisiana. Isolated groups can be found in water bodies around these rivers. These are one of the rarest and prized species of turtles found in North America. The species is also found in the Pascagoula River and is also called the Pascagoula Map turtle. The Pearl River Map turtle has a jagged keel on its carapace that looks more or less like a saw and gives it the name ñSaw-backî. This is a medium sized turtle that can grow up to 30 centimeters in carapace length. The carapace is low lying and tapered at the center. The tapering concludes into a saw like jagged medial keel. Every marginal scute has a vertical yellow bar on the dorsal sides. The carapace is olive green or brown and is divided by black stripes and yellow or orange coloration and patterns. The shell is covered with yellow or olive green rings and patterns that are more prominent in hatchlings and juveniles and fades as the Graptemys Gibbonsi grows old. The Pearl River Map turtle has a pale yellow, hingeless plastron. The plastron has a characteristic dark pigmentation on the seams. The head, neck, tail and limbs may vary from brown to olive and are usually the same color as the carapace. There are greenish yellow stripes and coloration all over the head and body. Most individuals have a trident of stripes between the snout and eyes. The female Graptemys Gibbonsi is significantly larger than the male and in many cases they are double the size of the male Pearl River Map turtles. An adult female can reach about 30 centimeters and an adult male can grow only up to 13 centimeters. They have large heads with strong jaws.