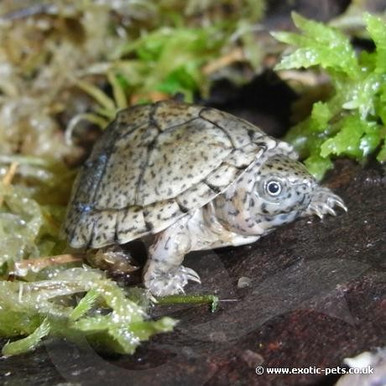 The Sternotherus Carinatus or the Razorback musk turtle is a native of United States of America, most commonly found in the states of Oklahoma, Mississippi, Arkansas, Texas, Louisiana and Florida. The razorback musk turtle is a favorite for turtle hobbyists because of its small size, sweet looks, temperament and ease of handling. A hatchling is almost the size of a quarter and can grow up to 6 inches. The Razorback turtle has a light brown carapace with black markings and coloration around the scutes. The carapace is raised at the center into a distinct, sharp, zigzag keel that gives it the name ñRazorbackî. Its body is slightly grey and brown with black and white spots all over. Its head is slightly bulbous with a prominent snout. A pair of tiny barbels hangs under the chin. The color of the plastron might vary from brown to yellow. The plastron is proportional to its size but is hinged only at one place. Even the single hinge disappears as the turtle grows and the flesh between the plastral plates increase. The Razorback Musk Turtle Habitat The Razorback Musk Turtles prefer to live in freshwater bodies with plenty of aquatic plants and a soft bottom. Unlike other musk turtles who prefer quiet, still or slow moving water the Razorback turtle has often been spotted in water bodies with faster current. The Sternotherus Carinatus is a very active species of turtles. Their activity can be observed both underwater and on land. Though a highly aquatic species, you can spot them in the warm dry basking area once in a while. For a single razorback turtle a 20-30 gallon water tank is recommended. For every additional turtle add 20 gallons to the aquarium. The water should be regularly filtered as they are messy feeders. In their natural habitat the Razorback Musk turtles are very vulnerable and susceptible to danger. The Sternotherus Carinatus is a very shy species and prefers dense vegetation, rocks, crevices and hiding spaces. Underwater fixtures and artificial plants should be used in plenty to provide the razorback turtle places to explore and hide. It gives them a sense of safety and security. The Razorback Musk Turtle is an infrequent basker. However a basking spot or a basking platform is reccommended. A big rock or an artificial log that protrudes out of the water surface will also serve as a basking spot. A UVB light should be fitted in the basking area along with a regular heating lamp. The optimum water temperature is around 75 degrees Fahrenheit and the basking spot should be 80-90 degrees Fahrenheit. The Razorback Musk Turtles are not cold tolerant and a submerged water heater is highly reccommended if you live in areas experiencing significant temperature drops. The Razorback Musk Turtle Diet The Razorback turtle is mostly carnivorous in the wild feeding on aquatic invertebrates such as crayfish, clams, snails, crickets and underwater insects. They also eat fish, bloodworms and earthworms. In captivity you can feed your Razorback turtle commercial turtle pellets, assorted insects, fish and meat chunk dabbed in powdered calcium and vitamins. The Sternotherus Carinatus tends to be obese if overfed and hence its diet should be controlled.