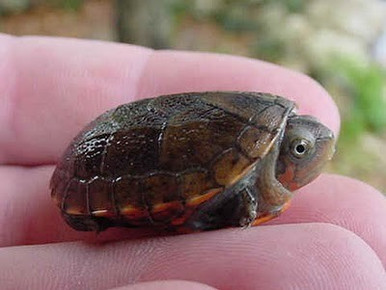 The Kinosternon scorpioides cruentatum or the Red Cheeked Mud turtle is a bright subspecies of the Scorpion Mud Turtle. The name Kinosternon and red cheeked both refer to the characteristic bright red and orange spots splattered across its head. They are endemic to the streams of Honduras, Nicaragua, and Southern Mexico, most commonly in El Salvador and Guatemala. They have a dark brown carapace with shades of orange here and there. The hatchlings or yearlings have a brighter carapace and is mostly orange. As the turtle matures and ages the shell becomes darker. The carapace is non-serrated, smooth, keelless and domed, giving it an almost semi-spherical appearance. Both sides of the head have elaborate and vivid orange or red patterns and coloration. They have a bright yellow plastron with uniform symmetrical segments. The border of each segment is dark brown. Except the ridges of the joint the plastron is plain and has no distinct pattern. The plastron is slightly smaller than the carapace and completely covers the turtle. The head, throat, limbs and tail of the Red Cheeked Mud turtle are red or orange with irregular black spots. The males are bigger than the females and have a longer heavier tail. The tail has a characteristic spur at its tip. Sexing in hatchlings and juveniles is a bit difficult as they donÍt show much sign of difference. As the male grows its tail elongates and a spur develops at its tip. The males can reach almost 7 inches while the females lag behind by only a few centimeters. The Red Cheeked Mud Turtle Habitat The Red Cheeked Mud Turtle is highly aquatic and prefers to live in shallow streams and slow moving rivers, ponds, lakes or ridges. They are quite shy and spend most of time underwater and most of the time, prefer to bask while floating at the surface of water. They inhabit water bodies with plenty of underwater plants and insect activity. For a full grown Red Cheeked Mud Turtle, a 75 gallon water tank is recommended. The water tank should be designed in the form of a palludarium and should have plenty of land as well as water area. There should be at least 65 percent water. The hatchlings are very small and need support to climb out of water. Artificial plants or ramps would help them climb out of water on land. The basking area should be split equally into shallow water and dry land. A combination of UVB light and heating lamp is recommended to maintain the basking temperature around 25 degrees Celsius. An under water filter is a compulsory part of the set up and if you live in regions where winter temperature drops below 20 degrees a submersible heater is also recommended. The Red Cheeked Mud turtle Diet The Red Cheeked Mud Turtle are omnivores with a strong inclination towards flesh. They seldom eat plants. Snails, crayfish, mollusks, worms, tadpoles and small fishes make up the most of their diet. In captivity you can feed them assorted insects, chunks of meat and fish, worms and commercial turtle food. The Red Cheeked Mud turtles are prone to obesity and should follow a scheduled weekly diet plan with regular dosage of calcium and vitamin supplements.