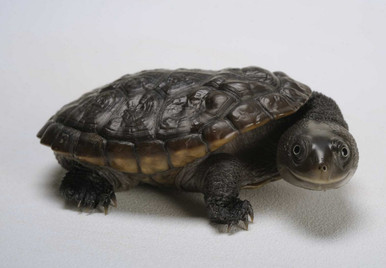 The Chelodina Reimanni or the ReimannÍs Snake Necked Turtle as it is popularly known can be easily identified by its oval shape, tapered to the front and broadest behind the center, and its keel less, olive to chestnut brown carapace. As the name suggests the ReimannÍs Snake necked turtle is characterized by an unusual long curved neck like that of a snake. It has a large plastron that almost completely covers the carpacial openings and has a posterior notch. There snout is slightly protruded and upturned. Like almost all turtle species the females of the ReimannÍs Snake Necked Turtles are larger than the males. While the females grow up to 20.6 centimeters the males grow only to 15.5 centimeters. It is easy to distinguish between a male and a female Chelodina Reimanni. The males are smaller and have thicker, longer tails than the females. Naturally found in the watershed of the Merauke River extending from south eastern West Irian to Papua, New Guinea. Recently H. Artner discovered the ReimannÍs Snake turtle near Muting and Bade. While the turtles of the Merauke watershed have broad head moving eastward to Papua, New Guinea the ReimannÍs Snake Necked turtles have slightly narrower heads. The Chelodina Reimanni became a popular option for breeding and petting because of its pleasant smiley face. In recent years North America has discovered a new hobby of petting and breeding exotic turtles, the ReimannÍs Snake Turtle is becoming a fast favorite for many turtle lovers for many reasons. ReimannÍs Snake Necked Turtle Habitat
The ReimannÍs Snake turtle naturally inhabits shallow marshy pools where the temperature exceeds 86 degrees Fahrenheit (30ÁC) for the most part of the year. During the months of summer they prefer to stay in the mud. Unlike other turtles that hibernate during winters the Chelodina Reimanni aestivates to survive through the dry season. You should set up a 15 gallon water tank at least 3-4 feet in length. Line the aquarium floor with a thin layer of clean coral rubble. Only nonchlorinated water should be used in these aquariums and the pH levels should be maintained to resemble their natural habitat. Use an underwater heater to keep the water temperature within the range of 60ÁF to 80ÁF. Though turtles are mostly aquatic they are equally fond of basking. It is generally advised to add a ramp or a basking area well-lit by multi spectrum lights. If you can provide natural sunlight it would be the best for your pet ReimannÍs Snake Necked turtles. The basking area should also be covered with sand and gravels. Place the turtle in its new habitat and make sure it can swim, climb the basking ramp and turn itself if turned on its back. ReimannÍs Snake Necked Turtle Diet
The ReimannÍs Snake Necked turtles do not eat fishes but are very fond of mollusks, insects and crayfish. In captivity you can feed prawns, whitebait, various insects and terrestrial invertebrates to them. A high protein diet is highly recommended. While breeding the Chelodina Reimanni prefer to eat vegetarian food. The turtle food sold in pet shops is equally welcome and enjoyed by these turtles.