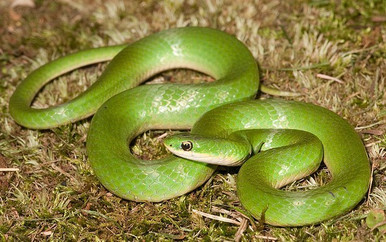 Green Snake, any of several species belonging to the family Colubridae, named for their colour. The North American green snakes are the two species of the genusOpheodrys. These docile, slender, harmless snakes often live in gardens. They lay eggs, and they subsist on insects and spiders. The smooth green snake (Opheodrys vernalis), sometimes called green grass snake, is about 50 cm (20 inches) long. The rough, or keeled (ridged), green snake (O. aestivus), often called vine snake, is about 75 cm (23 inches) long. The African green snakes (Chlorophis) have keeled ventral plates and are arboreal. Others of this genus are found in eastern and southern Asia. Rough and smooth green snakes are closely related, and while there are some differences between them, their care in captivity is essentially the same. These are both small, thin-bodied snakes native to North America. In the wild, there is concern about declining populations of these snakes, possibly due to habitat loss and use of pesticides. In fact, in some states one or both of these species is considered threatened or endangered. Keep in mind that taking these snakes from the wild may be illegal depending where you live.