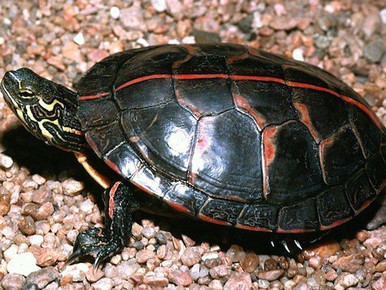 Chrysemys picta dorsalis or the Southern Painted Turtle is one of the lesser populated species of American painted turtles. They are mostly found in Louisiana, western Tennessee, Alabama, Northern Mississippi, southern Illinois and Missouri along the Mississippi river valley further south. Some of these are also found in Arkansas slightly extending into Texas around the Caddo Lake region. There are four species of the Chrysemys picta in North America all of them have non serrated, smooth carapace without any ridge or keel. There might be red or yellow lines separating each scute. The Southern painted turtle can be distinguished from others by a bright orange or red medial stripe that runs across the complete length of the carapace. The lower shell is yellow and the edge of the lower shell is often orange or red. The other distinctive feature is their size. The Southern painted turtles are the smallest painted turtles. An adult male can grow up to 5 inches and the females are only slightly larger at 7 inches. The males have longer and heavier tails than the females. The male Chrysemys picta dorsalis has long slaws on its forelimbs. The females normally nest and lay eggs within 200 feet of a lake or a pond but on some occasions they can be seen travelling further off. The Southern Painted Turtle Habitat The Southern Painted Turtle inhabit quiet still water of swamps, marshes, farm ponds, sloughs and shallow lakes. These turtles seem to have evolved into smaller versions of the painted turtles to fit into niche that goes normally uninhabited. They live in the quieter sides of the Mississippi River, the gulf of Louisiana. Hobbyists should keep in mind that these turtles have evolved and adapted to the southeastern swamps and are most suited for such an environment. They depend on such habitat for safety, shelter and survival. A close simulation of the natural habitat should be recreated in the aquarium. A 40 gallon water tank is recommended for a single male adult Southern Painted turtle and as the female is bigger they would need a slightly bigger aquarium. A 60 gallon water tank would be sufficient for a single female. The Chrysemys picta dorsalis are basking turtles and need ample amount of sunlight exposure. A basking area is absolutely necessary for them. The basking area should be fitted with a heating lamp and a UVB light and the temperature of this area should be around 85 degrees Fahrenheit. The Southern Painted turtles have no tolerance for low temperatures a submersible water heater is recommended to maintain the water temperature from 75-80 degree Fahrenheit. The substrate can be anything from sand to gravels and rocks of various sizes. The Southern Painted Turtle Diet The Southern Painted turtle are essentially omnivores. The Juveniles have a high protein requirement and are mostly carnivoresbut as they grow up they increasingly tend to be herbivores. The hatchlings and juveniles feed on aquatic insects, earthworms, bloodworms, fishes, snails and crayfish. Adults also eat hyacinth, aquatic lettuce, romaine lettuce and other leafy vegetables. In captivity you can also feed them commercial turtle pellets mixed with powdered calcium and vitamins.

Level Of Care:
Easy with Proper Care
Native Of:
Canada to Mexico
Diet:
Omnivorous, eating anything that fits into its jaws
Behaviour:
Extreme Friendly
Family:
Emydidae