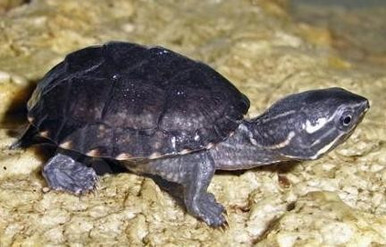 Sternotheros Odoratus or the Stinkpot Musk Turtles aka the Common Musk Turtle is a favorite among turtle keepers and is a great species for beginners. The Stinkpot Musk turtles are small turtles that grow only 5 or six inches in length. They can be brown, grey or black with characteristic yellow stripes on their neck that can be seen from a distance. Their head is slightly triangular with a pointed snout and a sharp tip. A yellowish-green stripe runs from the nostrils to the neck on both sides. There are barbels under the chin and throat. Its carapace is too small to protect its relatively longer neck and legs. Perhaps that is why nature has endowed it with a special defense mechanism. It secretes a pungent liquid when threatened or frightened. That defense mechanism gives it the name ïStinkpot Musk TurtlesÍ. Picking can cause stress and the turtle might feel threatened. However, captive turtles get used to mild handling. They have powerful jaws that can crush a snail in a snap. A bite on your finger can be awfully painful. The males are smaller than the females of the species and have thicker and heavier tails. The Stinkpot Mud Turtle hatchlings have a prominent keeled carapace but the keel diminishes and disappears as the turtle grows. The Stinkpot Mud Turtle Habitat The Stinkpot Mud turtles are one of the most widely distributed species of North America. They can be found from southeastern Canada to southern Ontario, Maine, New England, Florida, Wisconsin and Texas. TheSternotheros Odoratus is so common, it is also known as the Common Musk Turtle. They are a highly aquatic species and prefer slow moving streams, sloughs, canals, swamps, river edges, oxbows or shallow ponds. They are highly aquatic and leave water only to bask or lay eggs. However, they have been known to climb trees up to 6 feet while basking. A 30 gallon water tank is recommended with water depth of 10 inches to 2 feet. Parts of the tanks should be deep and other parts should be shallow. They are good swimmers but are not as good as other mud turtles in floating or hovering in the water. It is advised touse sand or gravels as substrate and fit enough artificial or natural structures that would help them climb out of water. You should fit plenty of underwater structures for exploration, shelter, hiding and climbing. Though the Stinkpot Mud turtleÍs basking habits might vary from regular to never a basking platform fitted with a UVB light and a heating lamp is recommended. The Sternotheros Odoratusare aggressive and to a great extent antisocial. The Stinkpot Mud Turtle Diet The Stinkpot Mud Turtles are carnivores and consume a wide variety of aquatic animals such as crayfish, clams, snails and aquatic insects. They also eat fish and carrion. In captivity you can feed your stinkpots bloodworms, earthworms, crickets and other insects, snails, shrimps and commercial turtle pellets. Overfeeding should be avoided. Adult Stinkpots should be fed only thrice a week and their protein intake should be regulated.