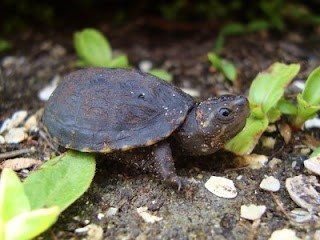 Kinosternon Baurii, more popularly known as the Three Striped Mud Turtle is an endemic American species and are mostly found in the peninsula of Florida, North Carolina, South Carolina, Virginia and Georgia. They are small turtles and grow only to 3-4 inches. They are more terrestrial and can often be seen poking around cow dung for food. The Three Striped Mud turtle is small and oval shaped with a well-developed plastron that is hinged to the carapace at two points and a large head. A pair of yellow zigzag lines runs from its nostrils along both sides of the neck. There are three parallel stripes of yellow on its carapace that give the turtle its name. The Three Striped turtle usually has a dark skin and a dark carapace though lighter shades have also been found. The Hatchlings have keels on the carapace but as they grow the keels disappear and the scute appears more or less depressed. The adults are smaller than the females and have a thicker tale. The Three Striped Mud Turtles Habitat The Three Striped Mud turtles are found in fresh water bodies such as sloughs, swamps, ponds and bays that are at least 2 feet deep. They are not deep water dwellers and are often found prowling on land even in daylight. In their natural habitat hatchlings live at a depth of 6 inches to 6 feet in dense aquatic vegetation. They live on underwater insects and snails and use the grass stems as ladders to climb out of the water. This should be kept in mind if you are designing an aquarium for a Three striped turtle hatchling. The Kinosternon Baurii are not good swimmers and the hatchlings should be kept in shallow water and the aquarium should have artificial or natural aquatic plants or steps or ramp of substrate that they can use to come to the surface or else they would drown. Adult Three Striped turtles have been observed to be mostly aquatic on many occasions they prefer to stay at the surface of water and sun bask than coming completely out to the open and dry land. For adult turtles the keepers should design a palludarium that resembles the three striped turtleÍs natural habitat. A 30 to 40 gallon water tank should be constructed. These turtles come to shallow water to bask and if they feel insecure or unsafe they like to dive deep under water for shelter. There should be both shallow and deep regions in the water tank and enough aquatic plants to create a safe environment. Three Striped Turtle Diet In their natural habitat Three Striped Turtles are essentially carnivores with slightly omnivorous inclination. They prey mostly on crustaceans, mollusks, small fishes and occasionally on carrion. They have strong jaws that can crush snails and smaller mollusks with ease. In captivity the Three Striped Turtle would happily devour the packaged turtle food, assorted insects, crickets, larvae and even cabbage and other vegetables. Hatchlings should be fed earthworms, meaty foods and commercial food pellets daily for 6 months and then they should be fed only alternate days. Adult turtles should be fed only twice every week.