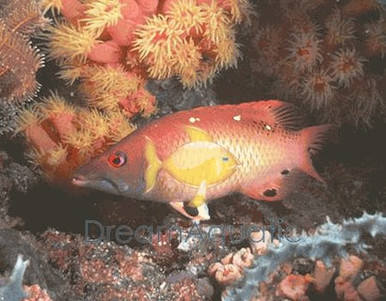 Diana's Hogfish - Bodianus diana The DianaÍs Hogfish, also known as Red & Gold Hogfish, Spotted Hogfish- has fourteen dorsal spines and eleven dorsal soft rays. Besides, it has eleven anal spines with ten anal soft rays. Its body is yellow with a purple brown head. There are four yellow spots and dark patches at the back of its body. Besides, all the fins of this species of hogfish have smaller black spots. Its scales are somewhat brown at the edges. The juveniles are easily identified from the matured ones by the difference in body colour. Compared to the yellow body of the adults, the younger onesÍ have reddish brown body. There are white spots on the side of the body. The younger ones often hide behind black corals. They are also found hiding in cave ceilings. Juveniles regularly clean parasites fro other fishes. They are semi aggressive by nature. Generally, this species readily adapts to the conditions in captivity. However, once it adjusts itself totally to the tank or aquarium conditions; it poses some threat to the newer fishes introduced into the same tank or aquarium. It is strongly advised to keep only one DianaÍs hogfish inside an aquarium. The reason being, two DianaÍs hogfish inevitably fight for the control of the tank. They are very territorial in nature. They are very easy to feed. Its flesh is known for the good taste and thus caught plentifully. They are marketed both as fresh as well as frozen. The catch becomes easier because of their low-depth habitat. They are caught so much that they now have a status-vulnerable. Maximum Size:
This species can grow up to 50 cm in length. General Size:
This species of hogfish is about 25 cm in length. Minimum Tank Size Suggested:
Medium tank size capable of holding 55 gallons of water is sufficient for this small species. Tank Conditions:
The DianaÍs Hogfish should ideally be kept in temperatures between 81 and 85 degrees Fahrenheit. The Ph balance of the water should also be maintained between 8.1 and 8.4 as they prefer alkaline content of the water to be high. The specific gravity should be maintained ideally between 1.020-1.023. The tank must be decorated with artificial caves and rocks; as these rock structures simulate their artificial coral reef environment. Habitat:
DianaÍs hogfish is mainly found in the Indo-Pacific region, more specifically, in the Red Sea and East Africa towards the Marshall Islands. In the Pacific region this type of hogfish is found in Samoa, which is to the north of Japan. They basically reside near the reefs at depths varying between 3 and 30 meters. They are generally found in sub-tropical climates, where sea temperature ranges between 24 and 28 degree centigrade. That is the reason why this type of hogfish is generally found in the Indo-Pacific region. Feeding and Diet:
Its diet mainly consists of mollusks but also crabs and sea urchins. This species is often found concentrated at areas, where gorgonians are abundant. So, coral reefs are ideal hunting grounds for Labrus Diana.