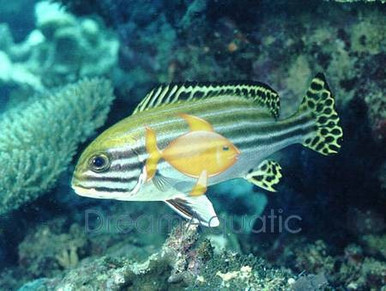 Dogfish Orientalis - Grunts Sweetlips The Oriental Dogfish, also known as the Lined Sweetlips, Oriental Sweetlips, or Dogfish Orientalis, changes body color as it ages. As a juvenile, Oriental Dogfish will have a tan color ventrally and three tan "saddles" on the otherwise solid black dorsal half. As an adult, Oriental Dogfish will be silver-white with a yellow mouth and fins. Black dots and horizontal stripes, or a combination of both, will extend from head to tail, including the fins. The Oriental Dogfish can be recognised by its colouration. It is silvery white with oblique black bands on the body. The median fins are yellow with black spots and the lips are yellow. When first introduced to the aquarium, Oriental Dogfish requires live food such as freshwater ghost shrimp, marine shrimp, or black worms. Once it has acclimated, most marine carnivore preparations will be acceptable. The Oriental Dogfish requires a tank with live rock and sand for hiding and grazing, and plenty of open, swimming space. Minimum Tank Size Suggested:
A 150 gallon or larger aquarium is required due to its size and eating habits. Oriental Dogfish grows at a rapid pace to almost three feet adult length, and a larger tank is needed to provide it with ample swimming room and plenty of hiding places. If placed in a reef aquarium, the Oriental Dogfish will eat smaller crustaceans, smaller fireworms, serpent stars, small snails, and polychaete worms. Habitat:
The Oriental Dogfish occurs in coral reef and inshore tropical areas of the eastern Indian Ocean and Western Pacific.These are found in Australia, Fiji, Srilanka and Maldive Islands. In Australia it is known from the offshore islands of north-western Western Australia and the northern Great Barrier Reef to southern Queensland. Feeding and Diet:
The Oriental Dogfish, is not suitable for a reef aquarium as it will eat snails, small crustaceans and starfish. The Oriental Dogfish diet should consist of a variety of meaty foods, including chopped shrimp and marine fish, mysid shrimp and frozen carnivore preparations but may need some encouragement with live foods. Tank Conditions:
The Oriental Dogfish requires a high quality water. They require warm water with temperature ranging from 72 to 78 degree Fahrenheit, specific gravity should not be less than 1.021 if no invertebrates are there. The pH value should remain between 8.1 and 8.4. It should be housed with other peaceful species and more than one can be kept in a very large tank.