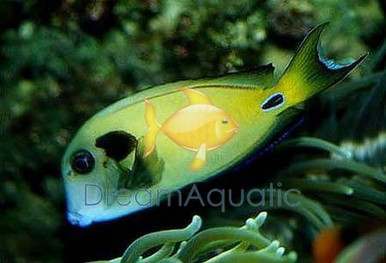 Eiblii Mimic Tang - Acanthurus pyroferus The Eiblii Mimic Tang, also known as the Chocolate Surgeonfish or Mimic Lemon Peel Tang, has a yellow oval body when a juvenile. It has blue highlights around the eyes and gill covers, mimicking the Lemonpeel Angelfish (Centropyge flavissimus). When mature, the body color darkens towards tan with red highlights forming around the eyes and pectoral fins. The dorsal, anal, and caudal fins take on the hues of green but remain tipped with the tan body color. The Eiblii Mimic Tangs are characterised by having a forward facing spine on each side of the caudal peduncle. This spine, apart from terminating in a point, has angular edges that result in a scalpel-like sharpness along its length also. When alarmed, these tangs can erect the spines sideways and slash at their opponent with rapid sideways movements of the tail. The Eiblii Mimic Tang is usually placid community fish, forming large groups or shoals, although fiercely territorial against other tangs or similar shaped or coloured fish in a typical aquarium setting. Great care must be exercised by aquarists when handling these fishes. An encounter with even a small, frightened tang can result in stitches. Due mainly to their calm nature, such attacks on humans are rare. Aggression in Eiblii Mimic Tang is usually confined to presenting their tails to a would be predator or attacker and is usually minimal against conspecifics. Most aggression however is due to territory disputes. The Eiblii Mimic Tangs are also very sensitive to disease in the home aquarium. It is usually necessary to quarantine the animals using copper sulfate or formalin for a period of around 2 weeks. Maximum Size:
The Eiblii Mimic Tang grows upto 10 inches. General Size:
This fish generally comes in size of 2 to 6 inches. Minimum Tank Size:
A 80 gallons or larger aquarium provides good environment for the Eiblii Mimic Tang Tank Conditions:
The Eiblii Mimic Tang should ideally be kept in temperatures between 72 and 78 degrees Fahrenheit. A pH value of 8.1 or 8.4, and a specific gravity of 1.020 to 1.025 should be maintained. In a fish only aquarium, the specific gravity should fall between 1.020 and 1.023. Habitat:
The Eiblii Mimic Tang is found on the coral reefs in Indo-Pacific ocean from East Africa to Panama, north to southern Japan, south to Lord Howe, Rapa and Ducie Islands; throughout Micronesia. Subspecies sandvicensis in the Hawaiian Islands. Feeding and Diet:
The Eiblii Mimic Tang is a herbivore and likes to eat Dried Seaweed, marine algae, mysid shrimp, Spirulina, Romaine Lettuce, fresh seaweed, and other meaty treats.