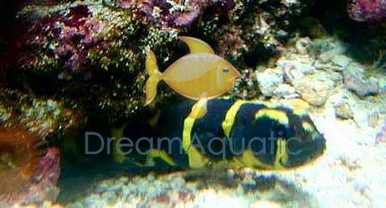 Engineer Goby - Pholidichthys leucotaenia Engineer Goby also known as convict Worm Goby, Pacific Neon Goby, Convict Worm Blenny, the Engineer Goby is not a really a goby at all it is the only member of the family Pholidichthyidae. The Engineer Goby fish is black with white horizontal stripe from eye to tail. It will dig extensive tunnels under your rock work. It is necessary to place the rock on the bottom of the tank for the Engineer Goby species to be kept in the aquarium. It is fairly disease resistant and may withstand sub-optimal water conditions. This species is indifferent toward other fish species, and more than one specimen can be kept per tank. Groups of juveniles will form shoals (they often occur in large groups in the wild). Large individuals will eat ornamental shrimps and tinyl fishes. Maximum Size:
The Engineer Goby grows up to 13.5 inches. General Size Specifications:
These fish generally will come to you 1 - 2.5 inches Minimum Tank Size Suggested:
The Engineer Goby prefers a tank of at least 70 gallons with plenty of places to hide & swim Tank Conditions:
Keep water quality high (SG 1.020 - 1.025, pH 8.1 - 8.4, Temp. 72 - 78Á F). Habitat:
The Engineer Goby fish is found in Indo-Pacific Ocean from Australia to Phillipines, north to the Ryukyu Islands, south to the southern Great Barrier Reef; Mariana and Marshall Islands in Micronesia. Feeding and Diet:
The Engineer Goby feeds on bottom-dwelling invertebrates, provide a varied diet that includes frozen preparations for carnivores. Breeding:
The Engineer Goby has been reported to the Breeder's Registry database three (3) times to date. Their lifespan is at least 3 years, with spawning occurring after 1.5, 2 and 3 years. The female is always listed as being larger than the male ranging. Other than size differences, the only noted difference between the sexes was the females fuller abdomen. Diet was varied and included both prepared and live foods. Spawning occurred in "nests" which ranged from the underside of a bivalve shell, small hole in a rock, to a 1 x 6" PVC tube. The Engineer Goby egg mass is described as whitish, adhesive and approximately 2 mm in diameter.The spawning frequency range from 8 - 28 days. The incubation is reported as 7 - 10 days at water temperatures of 76-81 F. with specific gravity at 1.021 to 1.022., pH value from 8.2 to 8.3. The hatching occurs at dusk and larvae are 3.0 mm in length with a small yolk sac and no pigmentation except eyes. The Engineer Goby larvae are phototaxic (attracted towards light) and can be easily collected using a Larval Snagger or using a "mini-mag" type flashlight and collecting the larvae in a glass, bowl, or slow siphoned. The larvae should not be collected with a net. The larvae can be fed rotifers and newly hatched artemia can be introduced between the 9th and 14th day. The initial food size for Engineer Goby larvae is in the 56-200 micron range. The Metamorphosis occurs around 26 days after hatching.