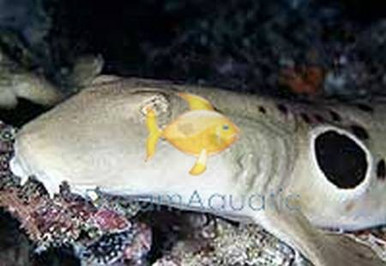 Epaulette Shark - Hemiscyllium ocellatum The Epaulette Shark is a member of the fish family Hemiscylliidae, collectively called the Longtail Carpet Sharks. The Epaulette Shark is a slender species that has a large black ocellus (eye-like spot with a marginal ring) above the pectoral fin and widely spaced black spots on the body. It has two similar sized dorsal fins and an anal fin positioned just anterior to the tail. This species has a oronasal groove which connects the mouth to with the nostrils, small triangular teeth, and short nasal barbells. The Epaulette Shark is very docile and unintimidated shark. Waders and divers can get very close without a response from the shark. By day, the Epaulette Shark usually remains concealed beneath the coral. At night it roams the reef flats using its muscular leg-like paired fins to clamber about the reef and into crevices looking for prey. The Epaulette shark has the amazing ability to survive low oxygen conditions by switching off non-essential brain functions; this is apparently an adaption for hunting in tide pools with low oxygen. The Epaulette Shark is oviparous (lays eggs). The eggs are about 10cm long and 4cm wide and hatch after about 130 days. Young are around 15cm in length when they hatch and males mature at around 60cm in length. Maximum Size:
The Epaulette Shark grow to a maximum length of 28.4 inches, and mature at approximately 24.0 inches. General Size:
This fish is generally available from 6to 14 inches. Minimum Tank Size:
The Epaulette Shark prefers a tank of at least 180 gallons with plenty of places to hide & swim. Tank Conditions:
The Epaulette Shark should ideally be kept in temperatures between 72 and 78 degrees Fahrenheit. A pH value of 8.1 or 8.4, and a specific gravity of 1.020 to 1.025 should be maintained. When kept with invertebrates, the specific gravity range should be 1.020 to 1.025, for the invertebrate species. In a fish only aquarium, the specific gravity should fall between 1.020 and 1.023. Habitat:
The Epaulette Shark is found on coral reefs and shallows (tide pools) along Australian and Papua New Guinean shores between 32ÁS and the equator. In Australia, the Epaulette Shark occurs from Shark Bay, Western Australia around the northern coastline of the continent south to at least Newcastle, and possibly to Sydney, New South Wales. It is a bottom-dwelling species which lives primarily in warm, shallow waters where it eats bottom-living invertebrates. Diet and Feeding:
The Epaulette Shark are carnivorous and feed mainly on benthic invertebrates (worms, crabs, shrimp, and small shellfish), possibly also small fishes.