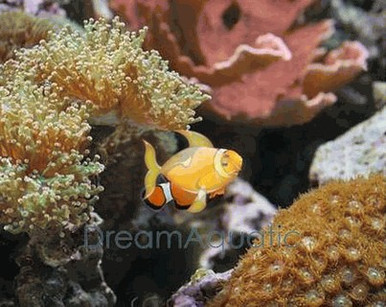 False Ocellaris Clown Fish - Amphiprion ocellaris The False Ocellaris Clown Anemonefish is orange with black markings on the fins. It has a white bar on the head, body and caudal peduncle (glossary). The middle bar usually has a rounded bulge anteriorly. The False Ocellaris Clown Anemonefish can be recognised by its orange colour with three white bars and black markings on the fin. It grows to about eight centimeters (three inches) in length. One can differentiate between Percula (True) and Ocellaris (False) by their respective colors and patterns. Ocellaris are usually less vibrantly colored, and have 11 dorsal fin-spines instead of 10, as on the Percula. It is a long-lived clownfish that is excellent for the beginner hobbyist. It does best in the presence of anemones such as Heteractis magnifica or Stichodactyla sp. Like the related damselfish, it is well-suited for all but the most predatory tanks. The False Ocellaris Clown Anemonefish typically inhabits coral reefs and is associated with the anemones Heteractis magnifica, Stichodactyla gigantea, S.mertensii and Stoichactis kenti. General Size Specifications:
The False Ocellaris Clown Anemonefish is found in depths from 3m to 15m. The False Ocellaris Clownfish (Amphiprion ocellaris) is a popular aquarium fish. It is very closely related to the Percula Clownfish and often lives in association with the sea anemone Heteractis magnifica, using them for shelter and protection. Generally Ocellaris Clownfish are hardier, and slighly less aggressive than its Percula counterpart. Both species are found in coral reefs around the world, particularly in the Fiji and Tonga regions. Habitat:
The False Ocellaris Clownfish occurs in tropical marine waters of the Indo-Malaysian region, from the Ryukyu Islands, Japan, throughout South-east Asia and south to Australia. A black variety with white bars occurs around Darwin, Northern Territory, AustraliaIn Australia it is known from the north-western coast of Western Australia and the Northern Territory. Feeding and Diet:
This clownfish is an aggressive eater. It will take most meaty foods and frozen herbivore preparations. Breeding:
Since the False Ocellaris Clown Anemonefish live in a warm water environment they can reproduce year-round. Each group of fish the False Ocellaris Clownfish consists of a breeding pair and 0-4 non-breeders. Within each group there is a size-based hierarchy: the female is largest, the male is second largest, and the non-breeders get progressively smaller as the hierarchy descends. If the female dies, the male changes sex, becomes the breeding female and the largest non-breeder becomes the breeding male. The development of the False Ocellaris Clownfish from juvenile to adult is dependent on the system of hierarchy. There is aggression involved in these small families although usually not between the male and the females. The aggression usually is between the males. The largest male will bully the next smallest male and the cycle continues until the smallest fish leaves the host anemone. Amphiprion ocellaris are very competitive fish and this causes the smaller fish to have a stunted growth. However in an aquarium, this fish is peaceful, and it can live in an aquarium environment well. The False Ocellaris Clownfish lay their eggs in a safe spot close to the anemone for protection; it usually takes 6-7 days for the eggs to hatch. During this time the male is very protective over the nest. The mother usually lays the eggs in the morning. The process usually lasts for about half an hour and 100 to 1000 eggs are deposited. The male fertilizes the eggs as they are laid.