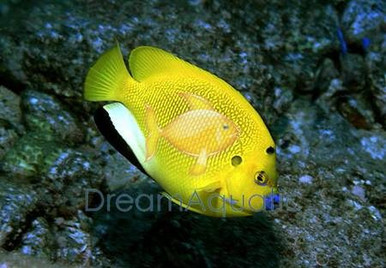 Flagfin Angelfish - Apolemichthys trimaculatus Found in the Indo-Pacific, the Apolemichthys trimaculatus grows in the wild up to 10 inches in length, but attains a much smaller maximum length in captivity. Better known as the Flagfin Angelfish, it should be housed in an aquarium with plenty of room to swim. It is one of the more difficult angelfish to adapt to prepared foods. Its natural diet of sponges is difficult to reproduce without the addition of live rock to the aquarium. It is not a completely reef safe fish, but the cost of sacrificing some live rock to maintain this beauty is worth it. Juveniles and Subadults are the easiest to adapt and will initially be shy, requiring several hiding places. Like most Angelfish, it should be kept one to a tank, though it is rather tolerant of other species. This beautiful fish is yellow overall, with black and white on the anal fin and blue "lips." This species can be one of the more challenging angels in the home aquarium, but it's not as difficult than the top selling Red Sea Regal Angel. This fish is best attempted only in an aquarium containing live rock. In a bare "fish tank" with nothing to graze on, this fish will have a tough time adapting, but in reefs or with live rock they generally fare notably better. Typically quite shy when first introduced into the aquarium, they should be provided plenty of hiding places, ideally consisting of rockwork with lots of caves. Keep only with other peaceful fishes and do not house with bold species of angels. Life Span: 25 Years Minimum Tank Size Suggested: The Flagfin Angel prefers a tank of at least 70 Gallons. Water Conditions:
Keep water quality high (SG 1.020 - 1.025, pH 8.1 - 8.4, Temp. 72 - 78Á F). Habitat:
Flagfin Angelfish are found near Samoa to the east Coast of Africa, including the Indo-Australian Archipelago. Diet:
The diet of the Flagfin Angelfish should include Omnivore, grazer, offer sponge based prepared diets and lots of algae Breeding:
All Angelfish are considered hermaphroditic, and visibly, it is not possible to differentiate males from females.