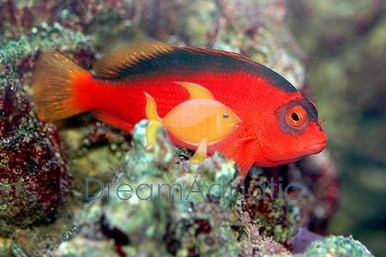 Flame Hawkfish - Neocirrhites armatus Flame Hawkfish an expensive Red and Black striped (horizontal) Hawkfish species with a flat tail, the Flame Hawkfish is disease resistant, robust and typically diurnal by nature, which means it stays active during the day. A protogynous hermaphrodite, the smaller juveniles become the females while the largest among the lot becomes the male. No obvious coloration exists between the male and the female individuals; neither does any morphological difference remains present regarding this aspect. The Flame Hawkfish lays its eggs in an open water environment and mates at dusk. Pretty aggressive by nature, the species should be kept with other active and competitive species. The species can live for 7 years or more if the conditions are ideal in the aquarium. Maximum Size:
Both the male and the female grow up to 9cms or 3.5 inches, though 5inch ones have also been located. General Size:
The smaller variety is generally 1 to 2 inches long, while the medium sized ones grow up to 2 or 3 inches. Minimum Tank Size Suggested:
This species should be kept in a 30-gallon aquarium; for captive breeding, the size must be increased to 200 gallons, with plenty of places to hide and to swim. Tank Conditions:
Though not particularly fussy, the Flame HawkfishÍs principal demand is a suitable point that shall allow it to survey its surrounding and enough rocky debris together with coral skeletons for perching. Vigorous water movement is necessary to make it adapt to the aquarium, as is a high degree of oxygenation of the water. Habitat:
Largely found in the Pacific Western region (Ryukyu Islands in the North and the Great Barrier Reef in Australia), the Flame Hawkfish is also found in the shallow Micronesian waters around the Caroline and Wake Islands where Pocillopora and Stylophora corals are abundant. Feeding and Diet:
The Flame Hawkfish is a carnivore with crustaceans being its primary diet in the wild. The aquarium environment usually turns it into a glutton, making it consume animal matter in bulk. The younger ones have an affinity towards the Mysis Shrimp while live Brine Shrimps tempt the difficult specimens. However, after becoming habituated to its new environment, the possibility of the Flame Hawkfish preying upon the other smaller fishes in the aquarium increases along with smaller variety of snails.